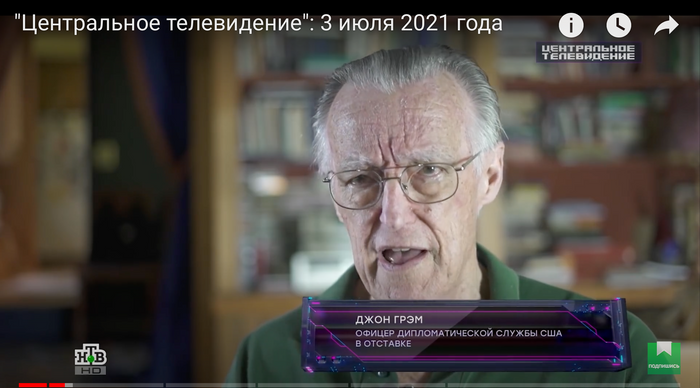 Since 2019 my biggest global media platform had been NTV, the second largest broadcast television network in Russia, where I was a regular “talking head” on a news magazine show that reached tens of millions of people across Russia as well as Russian-speakers around the world, including 1.25 million on YouTube (until NTV's access to YouTube was shut down by the Ukraine war).

What was I doing on a network that clearly was controlled by the Kremlin?

My own Russian speaking friends confirmed that, until the Russian invasion of Ukraine, NTV translators didn’t alter or censor my views on global issues such as Ukraine, the Middle East, NATO, espionage and the like. I called a spade a spade with both expertise and balance. And my appearances on Russian media were great chances for me to get my views to millions of people that normally I could not reach at all.

I’d like to think that NTV kept sending a camera crew out to me on Whidbey Island, Washington because my expertise gave me credibility. But it’s far more likely that the Russians simply wanted to inject at least a small dose of balance into their broadcast in order to improve their ratings.

But after Ukraine, there is no "balance" in Russian media and no place for me. I can no longer trust NTV not to selectively edit or otherwise manipulate what I say. I'm out, ending the last of my associations with Russian media.

My NTV interviews followed 10 years of appearances on RT, Russia’s equivalent of CNN, now shut down by the war.. Those programs were in English and consisted of me matching wits with RT’s anchors, avoiding their verbal propaganda traps and making the points I wanted to make. But when it became clear that RT, which was created in the 90’s as semi-independent media, had become nothing more than Putin’s mouthpiece, I quit. I post one of my RT segments below, not because the subject matter is still relevant, but to give you a feel for what was really great fun while it lasted.

I don't regret my associations with Russian media in the least. In my interviews, I gave at least as good as I got. More to the point, I know that many times I was able to present some balanced thinking to Russian minds accustomed to accepting the propaganda served up by the Kremlin. It was worth a shot.