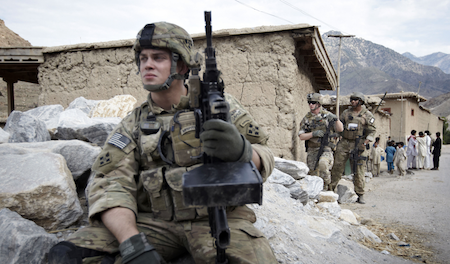 As you know, the United States went into Afghanistan in December of 2001 to find and destroy the Taliban (the ultraconservative political and religious faction that ruled Afghanistan and gave sanctuary to al-Qaeda, the perpetrators of the 9-11 attacks).

But September 11, 2021 will not be the end of that war. We know where it goes from there because we’re replaying a script we wrote in Vietnam and Iraq.

There, as in Afghanistan, we fought the wrong war in the wrong place with the wrong methods.

In Afghanistan, it actually started out well. Within the first few months of battle, US forces had driven the Taliban from power in Kabul, destroyed al Qaeda bases, and chased the remaining al Qaeda warriors out of Afghanistan and into the mountains of northwest Pakistan.

But the Taliban forces we toppled had only retreated into the Afghan countryside and a guerrilla war started as soon as the main-force war ended.

We were ready for that, we thought, with counter-insurgency strategies we’d developed in Vietnam and in Iraq.

We would protect the population from Taliban attacks, build up the military and civil capacities of the puppet government we had installed in Kabul, and win the hearts and minds of the Afghan people with a lot of local development programs.

All this would allow us to move toward withdrawing American and NATO forces, handing over security duties to the Afghan military and police which we would support and train.

Many of these ideas looked great on paper—but, as they had in Vietnam and Iraq, they fell short in a complex, hostile environment.

The worst mistake we repeated in Afghanistan was to think that we could replace their longstanding systems of government with one that was like ours.

In Vietnam, Iraq and then Afghanistan, America gave far too little importance to the power of local culture, history, traditions and relationships.

We saw the leadership that had existed for generations and even centuries in these places as authoritarian, corrupt and ineffective. Clearly they’d do better with a made-in-America form of electoral democracy. Clearly. But what was clear to us was utterly foreign and unacceptable to the people we were sure we were saving from themselves.

We expected that local people, seeing that we had delivered them from cruel warlords and government-by-bribes, and appreciative of the schools and hospitals we built, would magically become our friends, welcoming our culture in place of theirs.

I got a close look at how foolish that was. In my role as advisor to the City of Hué during the Vietnam war, I was charged with making sure that the elections demanded there by the United States would be free and fair. As part of that fool’s errand I had to lecture Vietnamese officials twice my age on the nature and practice of democracy, using foundational American documents such as the Declaration of Independence and the Constitution.

Since the US held the purse strings to millions of dollars in development aid, these officials had no choice but to listen, even though it was clear from the looks on their faces that I might just as well have been trying to convince them not to eat rice. I can still see their angry, dismissive stares.

It was no surprise to me that the counter-insurgency strategies I helped implement in Vietnam worked no better in Afghanistan, and for the same reasons.

But America doubled down in Afghanistan, at one point building our troop strength there up to 110,000, part of a strategy that mostly ignored local culture, history and capabilities.And so we fought a 20-year guerrilla war with neither side able to dislodge the other.

Now Joe Biden is doing in Afghanistan what three predecessors failed to do —leave that place where, over centuries, one foolhardy bunch of foreigners after another has assumed victory only to suffer ignominious, crushing defeat. There’s a reason Afghanistan is called “the graveyard of empires.”

In all three wars, American strategists assumed that overwhelming American firepower would provide clear-cut stable victories, ignoring Mao’s maxim that people defending their home turf can and do defeat superior military forces by using sharply honed guerrilla tactics, while depending on the enemy’s arrogance, ignorance and inflexibility.

In Vietnam, Iraq and Afghanistan we failed to see that the glue holding these so-called backward societies together was not allegiance to distant figures in some distant capital but a complex web of family, community and tribal relationships, often built up over generations, not by documents but with handshakes, marriages, and shared local projects like building community roads and wells.

American policymakers were certain that the only glue that mattered would be provided by a stable Constitutional government complete with noble documents, checks and balances of power, free and fair elections, and all the rest of our system. To provide this, we kept looking for—and failing to find—any leadership that would both share our aims and be honest, effective and attuned enough to local interests to gain the popular allegiance needed to succeed.

Instead we got a revolving door of corrupt generals in Vietnam, Iraqi leaders who pitted Sunnis against Shias, and warlords in Afghanistan who stayed tribal, with little interest or capability in creating a broadly appealing national government.

Don’t get me wrong, I think America made these mistakes with the best of intentions, sure that establishing democracies around the world was a good thing. And some of the schools and rural health clinics we built before we left Vietnam and Iraq may still be operating. Maybe.

There are actually people in this country who think it’s going to be different when we leave Afghanistan.

Let me tell you what I think will happen—

Just as in Vietnam and Iraq, there will not be a happy ending, for them or for us. We’ve recycled too many wrong assumptions and repeated too many mistakes.

Once we’re gone, the Taliban will give up any pretense of good faith negotiations with the government we installed in Kabul.

Within a year at most, the Taliban will return to power either as a result of military victories, or as a senior partner in some short-lived coalition that will, as has always been the case in Afghanistan, be dominated by factional infighting.

Whatever promises the Taliban made to us to speed our withdrawal they will break —they’ll have no incentive to keep them.

It’s possible that given the pervasive power of social media today, and the general raising of global consciousness on some social issues over the last two decades, that the Taliban will change. That perhaps this time around they will not dare—or perhaps will not choose—to re-impose the full fanatic strictness of their rule when they were last in power, including policies that severely subjugated women. But that’s a pretty far-fetched hope.

Even the hope that US efforts In Afghanistan crippled Al-Qaeda’s ability to wreak havoc in the US and around the world may not be justified. Last October there was a joint US/Afghan Army raid on a senior al Qaeda militant in the Afghan province of Ghazni. Documents and hard drives the raid produced make it clear that al Qaeda continues to thrive in Afghanistan, under Taliban protection, and that they remain connected to their cells and agents across the globe.

Drones, cruise missiles and special Ops raids are still options for the US in stopping al Qaeda actions, and presumably we will keep as many intelligence assets in Afghanistan as we can. But Al-Qaeda is remarkably good at building back from reversals.

So no, the last chapters of America’s involvement in Afghanistan have yet to be written.

I think it’s naïve to believe the story’s ending will be any happier than the endings of our stories in Vietnam and Iraq.

On this day set aside to honor those who have died in America’s wars, I would like to hope that we will finally learn from our mistakes and stop throwing American lives at problems that cannot be solved by their deaths.