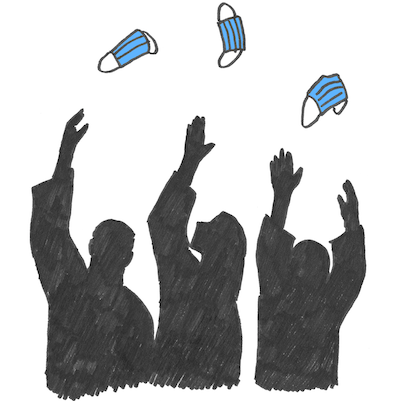 After the Pandemic, What?

The pandemic is easing in much of the United States. In the larger world, vaccines are finally beginning to flow from “have” countries to “have nots.”

As it ends in this country, I think it’s crucial not to rush onwards, without looking at these last, devastating months. There are huge lessons to be learned from what we’ve been through—about inequality, about race, about work, about ourselves—and we’d be monumentally stupid not to learn them.

I live not far from Mount Saint Helens, which famously exploded in May of 1980, devastating a huge swath of forestland, blowing down trees and burying them under tons of mud and ash. At the time, it looked like nothing could ever live there again. But within months, green shoots were forcing their way up through the ash, starting a cycle of rebirth and regrowth in a suddenly sunlit landscape healthier and more diverse than it had ever been before.

Lessons from nature play out everywhere. Without diminishing the costs and devastation of World War Two, a major reason why a defeated Japan and Germany rebuilt as quickly and effectively as they did was that they had to start from scratch, largely unencumbered by the outdated systems and infrastructures that burdened victorious post-war Britain and France.

As we deal with the death and disruption caused by Covid 19, will we create something new and positive out of the devastation? Will we build something better than what we had before?

Maybe—if we are honest, flexible and humble enough to learn—and change.

This pandemic—precisely because it has been so massive and relentless—now offers the United States and the world unique opportunities to reboot—to make our societies more just than they were, more efficient, less polarized and fearful, more thoughtful and compassionate.

Take income inequality, a core source of the anger, fear and mistrust that are tearing the US apart. Greed, indifference and a bought political system have been widening this chasm every day. But, as 1890’s America learned from another period of gross inequality, this level of imbalance is unsustainable. It prevents the kind of broadly shared prosperity that’s stable over the long term. Instead, it’s a prescription for disruption and violence.

But look what’s happening now. Notice all the “Help Wanted” signs in restaurants, hotels and shops. The millions of service workers laid off by the pandemic have been remarkably slow in re-entering the work force as the places they worked in re-open.

Republicans would have you believe the current labor shortages are all caused by generous unemployment checks that have made people lazy.

That’s a self-serving trope. What’s really happening is that service workers have become much more aware that it’s their own non-living wages that make possible the low prices all consumers enjoy. They notice those Help Wanted signs everywhere too, and they can see that, being in such demand, they don’t have to settle for non-living wages and lousy work conditions.

Employers, the smart ones anyway, are getting it that they have to offer better wages and conditions or get no takers for those jobs.

It’s this leverage wage workers now have, not laziness, that’s leading so many to hold back, looking for more satisfying work, better child-care options, higher pay or, for some, the chance to create a different lifestyle, even if they have to live on less money to do it.

There’s no way this genie is going back in the bottle. Nor should it. Economists of all stripes agree that the most effective way to reduce income inequality is to raise workers’ wages. The pandemic has given the world a huge opportunity to move toward economic justice and away from the looming danger of the kind of violence that’s exploded in earlier times of too large a gap between rich and poor.

Then there’s racism. Statistics show that people of color were substantially more likely to get sick and die from COVID-19 than were whites and it wasn’t because of some biological defect in their bodies. It was because they did jobs that forced them into exposed environments, because they had far more limited access to healthcare than whites and because, in the scramble for vaccinations, many people of color, largely due to access and logistical barriers, including less online access, found it more difficult to get the shots.

All of these factors are racist, and pandemic statistics shoved it in people’s faces just as the video of George Floyd being murdered did. The criminal justice system finally rendered justice for Floyd’s murder. It’s important that no one blinks now at the ugly racist realities that the pandemic has exposed, or rather re-exposed. As a nation, we all need to use the momentum created by our own uncomfortability to make our systems of health care, education, housing and employment colorblind.

White-collar office work could and probably should be changed now too. As disruptive as the shuttering of offices has been, it’s also created the heretical thought that crowded work spaces reachable by long commutes may be both unnecessary and dumb.

It's no secret that people are more satisfied with work when given more independence, flexibility and responsibility—and that these conditions make them more productive. The pandemic, by forcing millions of employees to work remotely, surely, if inadvertently, enhanced these conditions and re-enforced worker appreciation of them. People got extra time to spend with the kids, to recharge, to read, and still meet deadlines.

For some, it’s also been time to engage in the kind of reflections on values and life direction that are difficult when you’re stuck in traffic twice a day.

A recent poll of 2,000 American adults found that 42% of remote workers said they would search for a new job if they were asked to return to the office full time.

Employers are listening—well, again, the smart ones are. Many more companies are using hybrid work schedules, combining work from home and work in an office. They’re offering better options for childcare. Office spaces are going to be redesigned with the assumption that a lot of work and collaboration will be online. Zoom is here to stay.

Raise your hand if you want to go back to the old ways.

New ways of thinking and acting on issues of inequality, race, and work lead my list of the openings for change the pandemic has made in our lives.

For now, a word about the personal stuff. How have you changed, yourself? What are you doing differently from now on?

I know for sure that over the last year and a half of no travel and less contact with people outside this household, I’ve become more creative and reflective. I’ve got more thoughts than I thought I had. I finally launched long-delayed projects like this blog.

I’ve got notes for a new book I was putting off when life was full of meetings and speaking gigs.

And did I say I’ve become a really good cook, supported by a kitchen garden that I planted?

Meanwhile, I’ve got a huge picture of Mount Saint Helens in my home office. I can almost see the green shoots coming.

I’d love to hear what you’re going to be doing differently.