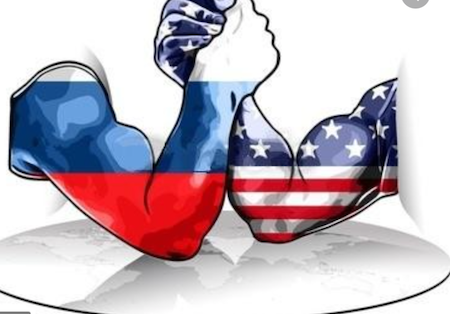 Are We Headed for a New Cold War?

A few days ago I was interviewed on Russian state television on a news show that draws over a million viewers inside Russia. The subject was President Biden’s trip to Europe and in particular his upcoming meeting with Russian President Vladimir Putin.

This is perhaps my 30th appearance on Russian media and I remain mystified why they keep asking me on, since I offer balanced views of issues the United States and Russia don’t agree on.

NTV, the network that airs the show, is controlled by the Kremlin so somebody in that government in charge of what’s broadcast knows that I tend to be a pain in the butt to both sides.

It’s been almost 30 years since my first appearance on Russian television. As leaders of the Giraffe Heroes Project in this country, Ann Medlock and I had been invited on to one of the very first live, uncensored, audience-participation television shows in the country. Our work in fostering civil society and personal involvement in public life was of interest to the new regime of Soviet President Gorbachev as he struggled to move his country out of a rigid, top-down communist system into one that welcomed such active citizenship.

We were interviewed by the host, Vladmir Posner, and then answered unfiltered questions from a live studio audience. At once a grizzled old World War II vet with a chest full of metals jumped to his feet and demanded to know why the United States was so intent on destroying the world with nuclear weapons when all the Russian people wanted was peace.

I told this man that Ann and I had been walking around Moscow all day without a map because I knew the geography of Moscow by heart; in my old job as a nuclear war planner for NATO, I’d aimed nuclear bombs on the city—and this man should know that there was someone just like me in Russia whose job it was to aim nuclear weapons at Chicago and New York and Los Angeles. Yes, planning for a nuclear war was and is insane but both sides were at fault. This prompted a very honest and moving conversation that was seen from Moscow to Vladivostok.

30 years after that evening, I’m still talking what I believe is sense to Russians, and I still draw strong comments from them, but I have to tell you, the animosity between Russians and Americans is as strong as I’ve ever seen it.

This week, that animosity is going to make the meeting between Biden and Putin a difficult one.

In Biden, Putin will find a much different and far more difficult opponent then he faced in Donald Trump. Putin is a master manipulator and Trump’s ignorance of the issues and personal vanity made him an easy mark for the master.

Biden has decades of experience in dealing with Russia and he understands US national interests and actually works to promote them—Trump had no clue and was focused on his personal agenda.

Biden’s talk leading up to this summit has been tough. Having called Mr. Putin a “killer” earlier this year, Mr. Biden is clear-eyed about his adversary. He regards Mr. Putin more as a hardened crime boss than a national leader.

Putin’s criticisms of US policies have been blunt and his hackers and trolls, in efforts to support Trump and the movement he represents, continue to spread disinformation and dissension throughout the United States.

With so much contention between the two countries, Biden, realistically, says he has no expectation of resetting the relationship in a single meeting. What the US wants, he’s said, is a stable and predictable relationship mainly focused on preventing a nuclear war. The two sides have already agreed to renew the START treaty limiting nuclear weapons for another five years—that’s a good beginning, but a lot more needs to be done to prevent what Putin has called “the start of another Cold War.”

But there’s far more on the table than just nukes. Most important is the overarching strategic difference between Biden’s America and Putin’s Russia. Biden relentlessly faults Russia’s human rights record and speaks passionately about the need to back democracies over autocracies (such as Russia and China) in a global competition for power and influence. Important weapons of choice in this competition include cyberweapons, election meddling, ransomware wielded by gangs operating from Russian territory, proxy wars and Russia’s threats to neighbors like Ukraine.

Biden is certain to raise these contentious issues, including the poisoning and imprisonment of Russian opposition leader Alexei Navalny, the SolarWinds cyberhack that attacked major firms like Microsoft and top government agencies, and ransomware attacks by Russia-based groups on a major U.S. pipeline.

And there are added complexities. The Biden administration is taking a much tougher line with Russia than most of America’s European allies want to follow, motivated as they are by important trade relationships with their Eastern neighbor. Some Europeans see Biden as too marked by the Cold War and too ready to go back to that contention, with Europe bearing much of the cost of worsening relationships with Russia.

Biden will continue to push his case with America’s European partners for a more confrontational stance and, whatever European misgivings there may be, he’s already said that in Geneva, he will make it clear to Putin that the US will impose “meaningful consequences” for behaviors that violate U.S. sovereignty, including cyberattacks and interference in American elections.

To which Putin will give absurd denials punctuated by his usual shrug of the shoulders.

So don't expect to see breakthroughs at the meeting between Presidents Biden and Putin in Geneva this week. There’s simply too much contention now on too many issues for that to be a realistic outcome.

Biden will be doing well if he can put some guardrails on the relationship, teasing out some measure of cooperation, starting with the future of the two countries’ nuclear arsenals. As to form, I've no doubt that Biden will convince Putin that there’s a new sheriff in town.

The stakes, of course, are high. So where does it all lead?