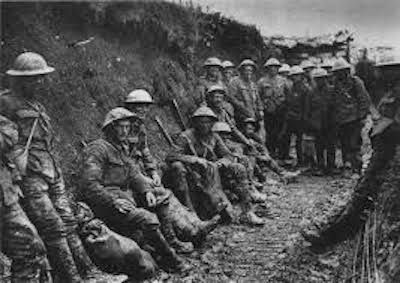 Tonight I’m thinking about battle fatigue. Mine and yours.

Reading, listening, figuring out what just happened, braced for what could happen next, I’m just tired of all of it. Maybe you are too.

I’m tired of this pandemic and mostly because an inept and uncaring national leadership has made it so much worse than it had to be—so much more sickness, too many deaths, more and more losses of jobs and homes, more people going hungry, and the frustrating new rules we have to live by.

I’m tired of Trump’s absurd efforts to undermine the constitutional transfer of power.

I'm tired of experiencing how polarized this country has become, a place where I can't go to the grocery or spend 10 minutes online without being reminded that right now we are NOT one nation.

I know, I know, this is Thanksgiving week and I should be saying how grateful I am. And I AM grateful—that at 78 I’m healthy and without economic worries, that I have a wife of 37 years that I adore and a wonderful clan that will soon welcome a sixth great grandchild. I’m grateful for my many friends worldwide. I’m grateful that it seems that I’ve done some decent things with my life, and that I’m not done yet.

So, yes, I’m grateful my life is good. But I know my life is embedded in a larger community, nation and world where life is not so good. So I’m tired (and worried and frustrated) that it seems so hard today to solve or even address the kind of tough public problems that people of intelligence, energy and compassion have been able to take on in more reasonable times.

I’m old enough to remember how hopeful things looked following World War II when Americans came together with brains and farsightedness to build and lead a New World order that had a shot at creating a level of peace and prosperity the planet had never seen before.

Now, Trump has deliberately ended that leadership role and global institutions are significantly worse off because of US withdrawals and indifference—the United Nations, climate change efforts and trade come to mind.

I remember Lyndon Johnson signing those crucial pieces of civil rights legislation, and the vital Supreme Court decisions on race and the inspirational leadership of Dr. King. There was a real sense then that we were turning away from a past of deep racial injustice, turning toward equity and respect for all.

And now we’ve got armed white fanatics guarding their homes in gated communities, white supremacists killing innocent protesters and unhinged cops committing murder in front of our eyes, assuming they’d get away with it. It’s not just George Floyd who couldn’t breathe. It’s everyone who was appalled by the Trump dog whistles and unrestrained white power social media that have unleashed a wave of toxic racist attacks.

I remember the signing of the Clean Water Act and the Clean Air Act and the sense that finally environmental values would be honored in national policy. Now we have rich, thoughtless companies unleashed to despoil the most pristine and beautiful of our wildernesses.

America used to be a place where inequalities of income were not extreme, at least not in comparison to the chasms we see today. Wages were high enough that one person could support a family with one 40-hour-a-week job.

I’m no Pollyanna about the 50s and 60s. Americans tangled over different political beliefs and those conflicts were intense—over race, feminism, and the Vietnam War. Still, it was rare for people to demonize each other the way they do today in a political and media culture that feeds on lies and baseless fears.

I was walking down the main street of the village where I work last week. It’s a place with a very low incidence of Covid infections and almost no deaths because there’s been a mask mandate since midsummer and we’re all on board with it.

Except for some of the tourists that take the ferry over from the mainland. I walked past one of these maskless tourists last week and I politely told him that there was a city ordinance requiring masks. His response was a cascade of vitriol, centered on my cowardice, my unwillingness to think for myself, etc. etc. When this man paused for breath, I reminded him that he was a visitor in my town, that our decision to require masks had made the place a safe one for him to visit, that he had no right to unilaterally overrule us, and that he was endangering all of us by not wearing a mask.

He was about to start swinging when his wife grabbed him and led him away. His last shouts were that he was going to be here for three days and would greatly enjoy breathing on the rest of us.

And there it was. The irrational rage, and the denial of scientific facts that the President and right-wing media have been spewing, right there, wanting to punch my lights out.

Disheartening, to say the least.

I can tell myself that that maskless guy might be a wonderful father and might volunteer every Thursday afternoon at the soup kitchen at his church. Maybe I stepped on a landmine put in his psyche decades ago by some awful slight or loss. Maybe he was just having a very bad day. Maybe he’s just an asshole.

I suppose, like the rest of us, he wants his family to be safe and prosperous. And that’s something we could talk about if we could get past the rage. The possibilities for common ground in this polarized nation are certainly there, perhaps not for irretrievably hard-core extremists of the right or left but for the great mass of the rest of us.

I’ve certainly been guilty of pouring gas on some political or cultural fires and I know better. Hell, I’ve written books on the subject and maybe hypocrisy is just the devil I need to exorcise if I really believe that we Americans can create a future the keeps us all safe in a culture and economy that’s equitable, non-judgmental and limitless in its possibilities.

I believe that we Americans can come together to solve at least the most basic of our challenges, such as immigration, education, infrastructure and healthcare. We’ve managed to set a bold new course for our country several times in our history and we can do it again.

I believe that America can re-assume a vital leadership role in a multipolar world. That we can repair essential alliances abroad and maintain strong, smart communications with our adversaries.

I hope you believe these things too.

Yeah we’re exhausted by all that’s hit us in recent times but the times they are a-changin. The country didn’t go over the cliff into authoritarianism in the election. It isn’t going to be easy, but we’ve got a chance now, a reboot.

I’m taking a deep breath, pulling on my boots, headin’ back into whatever it takes, whatever I can do to help that reboot work. Hoping you’re up for it too,