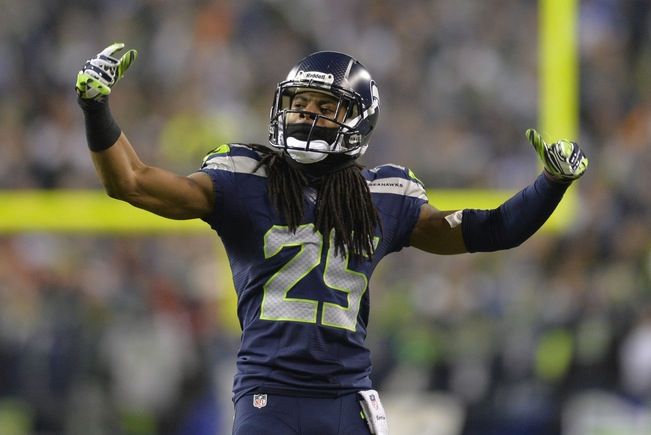 Broken Play: Richard Sherman, Martin Luther King, and a Game for the Ages

What a performance! And when it ended, the talk swirled around a brilliant, passionate 25-year-old black man whose skill, brains and ability lifted him and his team to victory against opponents who were doing absolutely everything they could to make sure they failed. His name was Dr. Martin Luther King Jr. He had joined the Montgomery bus boycott and, playing brilliantly, was key to forcing a Supreme Court decision in favor of the boycotters, a decision that led the way to bigger victories.

For days after the thrilling football playoff between the Seattle Seahawks and the San Francisco Forty Niners, much of America obsessed over the actions of another brilliant, passionate 25-year-old black man. His name is Richard Sherman, a cornerback for the Seahawks whose stellar play saved the victory for his team—and whose angry postgame rants on television sparked a national controversy that refuses to die.

Many people (especially those who had never heard of him before) saw Sherman as a classless thug, even though his full record shows a much more complicated human being. Others saw his unhinged anger as an exciting alternative to the usual postgame pablum and they excused his self-absorbed shouting as an inevitable (and to some people welcome) part of a brutal sport.

King/Sherman. A national icon and a football player. An unfair and irrelevant comparison? Really? Two men in their early twenties—both bright, well-educated, courageous, hard-working and passionate in their dreams for success. Sherman had to fight through all the challenges of growing up in a poor, violent black community with few lines of support. But Dr. King had the whole weight of a segregated society pushing him down.

Both men succeeded in part because their intense preparations for combat let them anticipate their opponent’s moves and put themselves in the right places and at the right times to counter those moves. Dr. King’s leaps may have been figurative, but both men went impossibly high to snatch victory from defeat.

Dr. King’s decisions in those early years reinforced a vision of success that so transcended himself as an individual that today we celebrate a holiday in honor of his service to society. The challenges Richard Sherman surmounts, however, seem to drive him inward, not outwards, detracting from his team’s image and reputation even as its victories on the field mount. King could transmute the anger he must have felt into momentum that spurred him on. Sherman wastes the power of his anger in trivial insults.

This comparison matters because role models matter. Since the beginning of time, telling the stories of heroes has been the most powerful way any culture transmits its core values from one generation to the next. The Giraffe Heroes Project, which I’ve helped lead for over 30 years, gives people stories of real heroes--men and women whose courage and compassion in the face of challenge inspire others to take on the public problems they see in their communities, nation and the world. We see every day, especially from our work in schools, how positive role models lift people up.

Sure, Richard Sherman is only 25 and he’s got time to figure this out. But he was just on the biggest stage of his life, with tens of millions of people marveling at his great play, ready to listen to and be moved by his words and actions. Many of those viewers were young men, including young black men, who, whether they would admit it or not, are looking for how to act, how to be, in the world. Sherman told them to be self-absorbed and not team players, to let anger overwhelm passion, to reach for cramped one-upmanships instead of celebrating a mighty victory over a worthy opponent in one of the most fiercely fought football games ever played.

Switch roles. What would a 25-year-old Dr. King have said--adrenaline still pumping, sweat dripping--at a postgame interview watched by millions after the biggest play of the biggest game of his life?