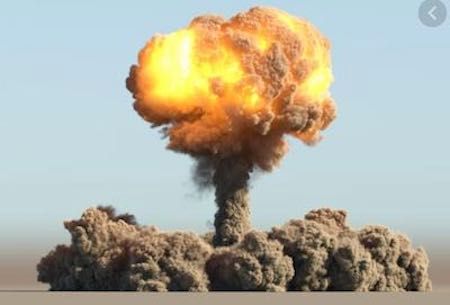 Putin said two weeks ago that he’d placed Russian nuclear forces in “a high state of readiness,” but NATO intelligence has picked up no sign as yet of the actual movement of warheads and launch vehicles out of locations where they are stored. That’s a good thing.

But the possibility of nuclear war is still what motivates NATO’s refusal to create a “no-fly zone” over Ukraine, a move that would carry the risk of widening the war beyond Ukraine, up to and including a nuclear response from an irrational and unpredictable Russian leader.

Here’s how I’d assess the current odds on a nuclear war starting in Ukraine:

First, the stakes in this war get higher with every public comment made by the leaders of NATO, Russia and Ukraine, ratcheting up tensions and providing incentives for increasingly risky behavior.

Putin has made it plain he sees the war in Ukraine as an existential crisis where a Russian defeat would threaten the very existence of the Russian state. He sees Ukraine as an integral part of Russia, intertwined by over 1,000 years of history, ethnicity, geography, and culture. Putin has fumed for two decades over NATO’s eastward expansion following the collapse of the Soviet Union. Now he sees expansion of NATO into Ukraine as a dagger pointed at Russia’s heart.

The current movement of NATO forces closer to the border of Russia pushes that dagger closer, as does the supply of arms by NATO nations to Ukrainian fighters and disastrous economic sanctions that threaten both the Russian economy and Putin’s hold on power. All are further proof to Putin—and to many other Russians—that NATO is the aggressor, intent on finishing the job of obliterating the Russian state once and for all.

NATO says these fears are nonsense. To NATO, all its recent actions are a defensive response to Russia’s attacks on Ukraine. So NATO is there to block a bully.

But that’s an incomplete explanation. There’s a deepening fear in NATO that Putin has no intention of stopping with Ukraine—that his aim is to redraw the boundaries of Europe to what they were before the Soviet Union collapsed. And as the war intensifies, NATO increasingly sees the conflict as a battle in a global contest for dominance between autocracies and democracies. Black and white. Bad guys versus good guys.

President Biden, American Congressional leaders, and many of our NATO allies use this language. To them, stopping Putin in Ukraine is not just blocking a bully who’s attacking a small nation we like; what’s now at stake is the entire philosophical worldview and way of life that are the realities of Western liberal democracies. Ukrainian President Zelensky, in his passionate calls for support, has powerfully reinforced this point of view.

This escalation of stakes is a major reason why nuclear war has become more probable. Because there is now simply too much on the table for either side to risk losing, intolerable risks become tolerable.

A second factor that makes nuclear war in the Ukraine more probable is the nature of the nuclear war that could be fought there. When I was planning nuclear war, it was NATO that had developed small “tactical” nuclear weapons designed not to demolish Soviet cities but to destroy limited military targets such as supply depots or small concentrations of troops with blasts far smaller than those that had destroyed Hiroshima and Nagasaki. NATO then had in its arsenal nuclear weapons small enough to be carried by a single soldier in a backpack and implanted in a West German farmer’s field. It would be just large enough to incinerate one or two advancing Soviet divisions. In that era, the Soviets didn’t have such small, tactical options themselves and declared that any NATO use of any nuclear weapon, even such a small one, would result in their launching of huge, city-flattening weapons.

No longer the Soviet Union, the Russian Federation has now developed its own small tactical nuclear weapons. Most analysts think that Putin’s recent nuclear threat was about using such weapons to hit specific military targets within Ukraine on the assumption that NATO—under no formal treaty obligations to Ukraine—would not dare to respond in kind against targets in Russia for fear of launching World War III.

But Putin’s assumption could be quite wrong. NATO surely sees the danger if it caves to every nuclear threat from Moscow. Who would be next? Escalation of any nuclear use is likely if not inevitable. In every nuclear war simulation I ever participated in with NATO, every time a simulated war started with the use of even one small tactical nuclear weapon, it grew into a global thermonuclear conflagration within days if not hours.

Then there is the desperation factor. As their land war bogs down, as more Russian mothers weep over dead sons, as sanctions bite deeper, as Ukraine’s appeals turn most of the world against Russia, as anti-war demonstrations continue across Russia—Putin will become more and more desperate. With so much invested in terms of money, men, equipment, international standing and national pride, Putin simply cannot back down. He would be out of power and perhaps on trial in an instant. To a man never known to be concerned for the wellbeing of his fellow humans, the nuclear trigger becomes more and more of an option. Desperate people do desperate things.

Finally, there’s the fog of war, always present. People under fire often simply panic or grossly misread the nature of incoming threats. Command and control procedures can fail to work as designed and field commanders can make devastatingly wrong decisions. During the Cold War there were at least a half a dozen instances when a nuclear war was almost caused by accident—a radar operator interpreting a flock of geese as an incoming missile, a garbled code...

So that’s what I see going on as of Monday, March 21. We could be in a totally different place tomorrow.

Anything is possible in the days ahead. If the Ukrainians refuse to quit and Russia’s losses continue to mount, Putin could well use small tactical nukes in Ukraine, forcing a terribly difficult NATO decision.

We need brave, intelligent, far-sighted responses from our leaders. We can’t rush headlong into risks. But we can’t be afraid to take them where we must.