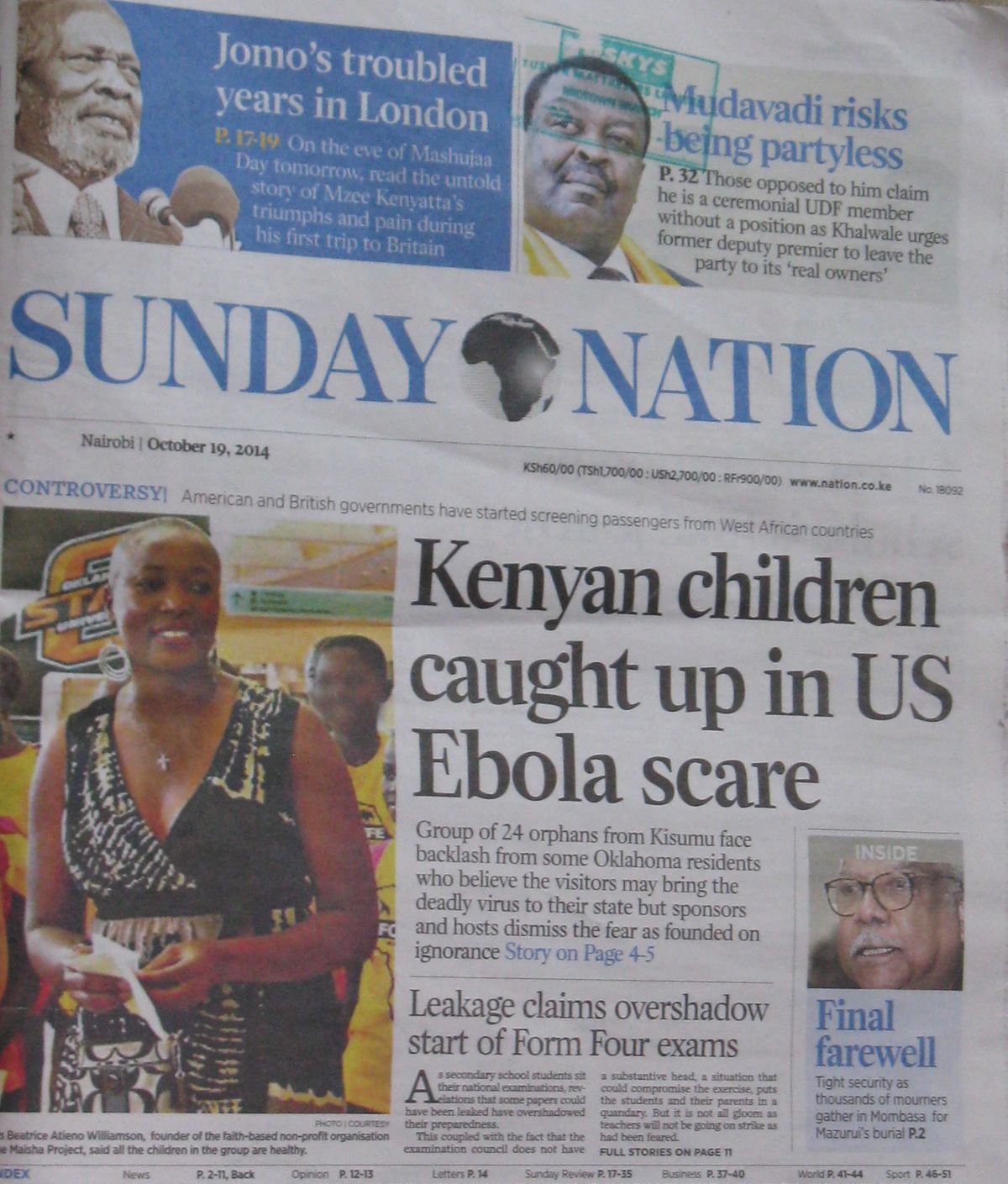 Ebola and the Fear That Makes Us Stupid

Who says that ordinary Americans can’t make a difference? Last week, a few hundred frightened, insular people in Oklahoma City got millions of Africans scratching their heads about just how stupid Americans can be.

The story may have been tucked into page 10 of your newspaper or newsfeed but I saw it all over the front pages in Nairobi:

As the opportunity of a lifetime, 24 kids from an orphanage choir in Kenya had come to the U.S, to give a series of concerts to raise money to help poor children in rural Kenya. Supported by faith-based charities in Oklahoma City, the kids had scheduled their first concert there and local volunteers helped publicize it. But the wrong kind of word began to spread. First there were phone calls, then emails and Tweets. Then a blast from a local radio shock-jock. “Turn the kids back; they could be carrying Ebola. We got to protect our own.” Hundreds joined in panicked verbal attacks on these kids that jeopardized the concert and their entire tour. The kids and their sponsors were devastated.

Never mind that these kids came from Kenya, which is as far from the Ebola epicenter in West Africa as Boston is from Los Angeles. Never mind that, if the people of Oklahoma City wanted to worry about Ebola, they had only to look south a few hundred miles to Dallas, where a real Ebola threat, however minor, actually existed.

America is, of course, a modern country whose citizens have easy access to the latest and most accurate information. That didn’t stop blind fear and willful ignorance from driving these outrageous actions in Oklahoma City—and others; reportedly a woman in Ohio showed up at an airport in a homemade Hazmat suit. Ancient peoples quaked in fear during thunderstorms and invented gods and offered sacrifice in response. But at least they had an excuse: they didn’t have the Internet to tell them what caused the heavens to boom.

I’m a leader of the Giraffe Heroes Project, a nonprofit that moves people to stick their necks out for the common good. As one friend put it, we teach courage--through programs that tell the inspiring stories of real heroes, and through speeches, books, blogs, trainings and curricula for schools (www.giraffe.org). I’m in Kenya to help launch a Giraffe affiliate here.

Over more than 30 years in this job, I’ve watched people confront fear successfully and I’ve watched them be driven by fear to do the most irrational things—or to do nothing at all when action is the only reasonable course.

What separates these two reactions to threat?

Ignorance plays a role. If you really don’t know what’s happening to or around you, it’s easy to get scared. New and better facts can calm you down—unless they don’t. There are many stories of lost hikers so panicked that they have literally walked across a road and disappeared into the bush on the other side. Fear can trump facts and, as in Oklahoma City, it happens all the time. But it doesn’t stop there. Fear can build its own set of pseudo-facts to justify itself (“Obama is a Muslim alien!”) and that happens all the time too.

Fear, of course, is sometimes justified by fact. When faced by a real physical threat, fear triggers the biological responses that help you survive. Working in the Giraffe Heroes Project, I’ve learned a lot about why people take risks and why they fear--when their fear is not justified by fact.

I put fear of death at the top of the list. Too few people ever take the time or effort during life to develop a sufficient spiritual basis for their existence that will allow them to be comfortable with its ending. So a relentless, insidious disease like Ebola brings a special, terrifying feeling of helplessness.

Isolation builds fear. We are naturally communal animals, and the more today’s culture separates us into political, economic and social enclaves, the easier it becomes to fear those not like us, to justify and reinforce the protective walls we put around ourselves, and to deliberately close ourselves off from facts that might lead to breaching those walls.

Fear sells. Unscrupulous media, political and corporate figures have perfected it to an art form to build ratings, careers and fortunes. Media is pervasive and immediate, which greatly reduces time for reflection, assuming we have the mind to reflect.

Fear is abetted by lack of trust, and not just in those who never deserved it in the first place. We have thrown the baby out with the bathwater. Too many of us trust no one other than those who deliberately pander to our fears. Too many trust independent professional analyses less that they trust unsubstantiated drivel from sources such as Fox News or gossip from friends who favor the same limited sources of information as we do. Why leave an echo chamber to risk learning something new that might challenge a worldview that provides one of the few sources of stability we have left?

I think all of this was going on in Oklahoma City and the victims were 24 orphans from Kenya, the truth, and America’s reputation in the world.

We need to redouble our efforts to fix this. There are plenty of brave women and men, in Oklahoma City, as in the nation, who honor fact, speak the truth and persevere under fire. Their stories are powerful, their examples inspiring. We need to make special efforts to make sure they are heard above the dins of fear and ignorance. We need to hold our schools more accountable for teaching critical thinking than we now do, and to accept these lessons ourselves. We need to force changes in our electoral processes and funding rules that make it harder for well-funded, self-serving fear-panderers to win elections. Red or Blue, we need to elect more people of courage and integrity committed to serving the common good.

We need to be less afraid.