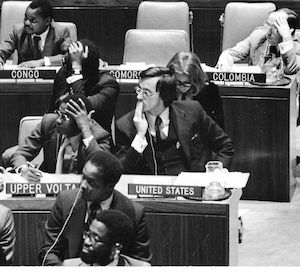 Enough Hypocrisy to Go Around

It was an honor to represent my country at the United Nations for three years, despite the organization's blatant hypocrisy, a condition that has only gotten worse.

With votes from countries, like the US, in thrall to its oil blackmail, Saudi Arabia has just been named Chair of the UN's Human Rights Council.

Saudi Arabia!! Saudi Arabia is the base and financial support for Wahhabi Islam, an extremist sect that empowers both al Queda and ISIS. Saudi Arabia spawned the 9/11 killers. Saudi Arabia beheads people for civil disobedience. "Saudi Arabia has arguably the worst record in the world when it comes to religious freedom and women’s rights," UN Watch executive director Hillel Neuer said in a statement. "This UN appointment is like making a pyromaniac into the town fire chief."

The United States has a long history of supporting despicable foreign despots in service to geopolitical goals. Sure, it's a tough world out there and we can't just have saints in our corner. But Reagan's support for brutal dictators in Latin America--seeking UN votes for "our" side in the Cold War--was clearly never worth the damage it did to our global reputation. And now, especially with America fracking its way to energy independence, there's simply no excuse for staying best friends with the Saudi princes.

Yes, we do need a partnership with them, if only because they occupy key real estate in the Middle East. But with Iran ascending, the Saudis need our help way more than we need theirs. Let's put some tough human rights conditions on any support we give them.