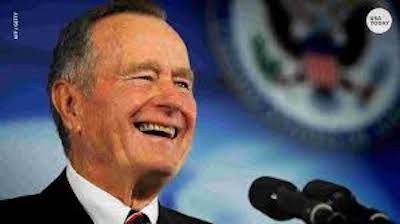 The memorials for George H.W. Bush remind us that this country has produced leaders of unfailing courage and integrity who tried hard to do the right thing no matter what the personal consequences. The reaction of Donald Trump and his acolytes to the brutal murder of American-based Saudi journalist Jamal Khashoggi—and the Saudi cover up—is the latest example of how far we’ve fallen from that standard.

Secretary of Defense Mattis and Secretary of State Pompeo both prostituted themselves before the Congress this week declaring that US geopolitical interests in Saudi Arabia are such that we should not press our complaints over Khashoggi’s brutal killing, even though a torrent of evidence proves the complicity of the Saudis. Mr. Trump followed up this shameless performance with his own exaggerations of the economic and geopolitical value of a “friendship” with the Saudis that America has overvalued for years.

“Friendship?” The Saudi royal family runs a feudal kingdom no more morally sophisticated than that of the feuding desert warlords depicted in Lawrence of Arabia.It still denies basic rights to women, operates within a primitive system of laws and justice, funds jihadist cells worldwide, and lives with a level of corruption that can be sustained only because of the vast oil reserves on which the Kingdom sits.

Our connection with the Saudis has long been based on four pillars. The first is our need for Saudi oil; that pillar crumbled with the advent of fracking in North Dakota.

The second is the absurd belief that the Saudi’s are our allies in the fight against terrorism. 15 of the 19 terrorists on 9/11 were Saudi citizens. And the Saudi regime, in order to keep internal peace, maintains an unholy alliance with its own radical clerics that lets the Saud family run the country’s politics while funding the clerics who are free to pump out radical jihad propaganda to Muslims all over the world through a vast system of Saudi-supported schools. The few dribs and drabs of intelligence we get from the Saudis come nowhere near to making up for the mayhem they fund through their complicity with radical jihad.

The third pillar is money. Private American firms make a lot of it in contracts with Saudi Arabia on everything from warplanes to highway construction. For much of this, the Saudi’s need us more than we need them. And is our support for the brutal war the Saudis are conducting in Yemen worth a few upticks in the stock price of Boeing and Bechtel?

The fourth pillar is geopolitics: “The enemy of my enemy is my friend,” my realpolitikfriends remind me. Even if we don’t really depend on their oil or their intelligence sharing or the construction contracts, the “realists’” argument goes, it’s important to keep supporting the Saudi regime because its financial heft is a major factor in preventing the Iranians from taking control of the Middle East.

My answer is that the Saudis have nowhere else to go. The Saudis oppose Iran, not to please the United States, but because of an existential Sunni/Shia split in Islam that goes back 1,000 years. A reassessment of American “friendship” with Saudi Arabia will do nothing to change that ancient division. And in terms of uncomfortable partnerships, a diminished and more critical relationship with the United States is far less risky to the Saudis than opening up their closed society to, say, Russia or China. The bottom line is that, in security as well as economic matters, the Saudi’s need us a lot more than we need them. We should use that fact to limit our cooperation with them far more than we have yet dared.

Despite the strong case against all-in US support of the Saudis, however, our government refuses to reevaluate our relationship with them, saying that moral judgments are the province of cowards and fools. The Khashoggi murder now gives us the perfect opportunity to reassess our position not just on this murder, but also on the essential weakness of a transactional approach to foreign policy that is quickly destroying both opportunities and friendships around the globe.

Bush 41 would tell us that we have now reached the point where the arrogant and brutal butchery by our Saudi friends and their clumsy lies about it has become our Bridge Too Far.

There are signs this may be happening. To its credit the Senate did not accept the toadying of Trump’s key lieutenants and instead insisted on hearing from CIA Director Gina Haskell who told them that American spy agencies had incontrovertible evidence (including an audiotape of the murder and 11 incriminating emails from de factoSaudi leader Mohammed bin Salman (MBS)) that prove beyond doubt that the murder was directed not just by the Saudi Arabians but by MBS himself.

So now some Republicans on the Hill are mad as hell, not just at the Saudis and MBS, but at Mr. Trump and his toadies for their dismissal of the brutal murder of an American resident journalist whose only crime was to expose the corruption of the Saudi regime. The question now is will at least a few of those Senators find the spine to do something about it—although two years of operating without such courage will make the task more difficult.

Tell me, even after a career as an American diplomat, am I am grasping at straws to think that anything will change? After all, it’s now clear that Mr. Trump has taken complete control of the Republican Party. Two years ago, powerful Republicans like Senator Graham showed shreds of integrity in standing up to Trump; now Graham is a vocal supporter. A few retiring senators like Bob Corker and Jeff Flake have given nice speeches but have not pressed for action in any meaningful way.

The allegiance of Trump’s base seems unshakable; the more absurd the man becomes, the more his base loves him. This destruction of one of the two major American parties is a devastating blow, not just to Republicans but to the national confidence that the system that has served us well for 230 years is still working.

Still—after Khashoggi, a few Republican leaders in Congress are finally saying the right thing on a matter of high principle, declaring that they want not only to do something about the murder but to also review other important aspects of our dealings with Saudi Arabia. If they do so, could this be the beginning of the revival of the Republican Party as a principled political organization?

Congress needs to come down hard, starting by drastically scaling back our military cooperation with the Kingdom, going beyond just stopping refueling Saudi fighters on their way to Yemen. The US should publicly condemn Saudi responsibility for the Khashoggi murder, naming names. We should freeze the assets of everyone involved in the murder, including MBS and his courtiers. We should reduce our diplomatic presence in Saudi Arabia.

A radio broadcast this morning noted that presidential funerals have over the years been an incentive for reviewing basic principles and building national unity in troubled times.

But will this one shake up the dead President’s party, bringing it back to its former self? Will all the eulogies citing a former President’s integrity, the telling of stories about his sense of honor and his devotion to high ideals rattle Republicans enough to return to their days of being hisparty?

Congress, both Republicans and Democrats, could come together to defy the moral midget in the White House. A united Congress couldwork together on a clear-eyed reassessment of our relationship with the Saudi regime. They could halt this nation’s decline as a world power by reinstalling concepts of justice, integrity and cooperation in our foreign-policy—not as idle moral concepts but as hard-edged operating principles, the principles that once made the United States a respected and effective leader on the world stage.