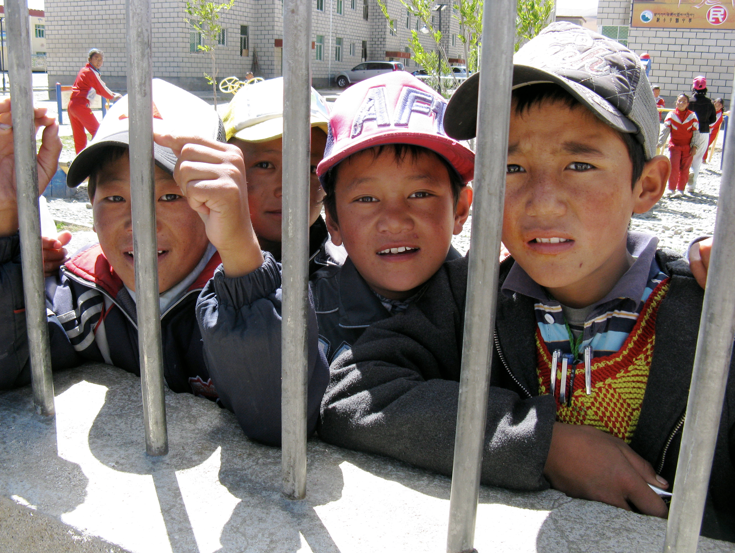 For ten days in October 2012 I saw first-hand what the Chinese are doing in Tibet. The reports you’ve heard of cultural genocide are true. China is obliterating the ideas, traditions and habits of the Tibetan people.

Do we care? We’d better. China’s confidence increases with each step onto the world stage. What the Chinese are doing in Tibet tells us a lot about what we can expect from them as their power grows.

It’s hard to get into Tibet. I described myself as a retiree on a Bucket List trip and prayed the Chinese would not bother to Google me. I was in Nepal, waiting, when the Chinese Embassy gave me a visa just hours before the flight I’d booked to Llasa. A short, spectacular flight across the Himalayas, and I was in the capital of Tibet.

Llasa is a Potemkin Village. The Chinese have built a modern airport and superhighway into town. Change the language on the signs and the part of Llasa that foreigners are supposed to see looks like a small wealthy city in Arizona. Better. Modern shops and manicured parks line the main street. The downtown is impeccably clean, there’s no congestion, and the traffic signals are high-tech marvels. Late-model cars outnumber motorbikes and most of those bikes are electric so there’s no hammering noise and choking fumes.

There was a significant uprising in Lhasa only three years ago and the Chinese want no more of that. Even in the part of Llasa open to foreigners, small units of Chinese soldiers in riot gear are stationed every hundred yards and foot patrols are high-stepping reminders to the Tibetans of the iron fist that rules their lives.

A key part of the Chinese plan has been flooding Tibet with Chinese immigrants from the east. Already Lhasa is 60% Chinese. The best-paying jobs all go to Chinese while Tibetans pick through what's left. Tibetans often suffer low-level harassment of many kinds that restrict where they can travel and where they can live. They can get thrown in jail for downloading a photograph of the Dalai Lama. In schools, Chinese is taught as the “mother tongue.” In those few places where Chinese signs are translated into Nepalese and English, the Chinese characters are twice as large as the English and four times as large as the Tibetan. The Tibetans get the point.

Poke behind the Potemkin walls, however, and just a few hundred yards from the manicured boulevards of downtown Llasa you’ll find acres of simple Tibetan houses, made of stone and cinderblock. It’s a crime not to fly the Chinese flag from your roof, but two-thirds of these little households risk a heavy fine by not doing it. The victory is temporary: Tibetan houses are being bulldozed one by one, with their residents moved to Cabrini Green–type high-rises as fast as these can be built. Farm folk who’ve been scratching a living on their land for generations are now watching Chinese soap operas on the 16th floor of a Cabrini Green apartment instead of talking with their friends in local teahouses and watching the sun go down over an acre or two of their barley. Forced moves like this starve not bodies but souls. The idea is to lead Tibetans, especially young Tibetans, to forget who they are.

The Chinese presence is a little less visible when you leave the capital, as I did on an eight-day road trip along the spine of the Himalayas, on roads and tracks that took us as high as 16,000 feet, winding through a barren series of sharp brown hills. Thirty miles to the south rose the jagged white wall of the highest mountains on earth.

China overran Tibet in the early 1950’s, the last episode in a fifteen hundred year struggle between Tibetans, Mongols and Chinese for political control of the “rooftop of the world.” The Chinese authorities forced Tibet’s spiritual leader, the Dalai Lama, to flee into exile in 1959. During China’s Cultural Revolution in the 1960’s, gangs of Red Guards destroyed nearly all the Buddhist monasteries in Tibet and killed or dispersed 90% of the monks as part of a frenzied assault on Tibetan ideas, culture, customs and habits. All this fueled a fierce anger and resentment among Tibetans, a proud people with their own warlike past.

Realizing the mistakes of the Cultural Revolution, the Chinese leadership adopted a smarter course. Today, a blanket Army presence discourages open rebellion while massive infusions of cash are building a modern infrastructure that is yanking Tibet out of feudalism and into the 21st century. There’s some truth in what a Chinese tourist told me in Llasa, “We are raising standards of living in the region with our investment, and providing Tibetans with better lives.” Tibetans now enjoy hospitals, government buildings, schools, paved roads, electric power, and censored-but-operable cell phones and Internet, none of which would be there without the Chinese. Compared to neighboring Nepal, the Tibet I saw looked modern. But all this modernizations is also meant to buy friends, especially among the young or those with short memories.

Contrary to reports I’d read before I arrived, the Chinese also seem to have withdrawn their heavy hand from the monasteries. Most of them have been rebuilt, some with Chinese help. Even the smallest towns have monasteries with ornate paintings, statues and wall hangings. I saw no Chinese soldiers or police near the holy places, which were crowded with local people who seemed to be freely exercising their faith. There’s no way this could have been staged for a handful of tourists, in place after place. Tibet may be the most religious country on earth. Beijing may have finally realized that Tibetan Buddhism is the only element in the country stronger than the Chinese presence.

It’s not clear that adding carrots to the stick is succeeding. There have been a continuing series of protests and uprisings in Tibet for the last sixty years. Eleven monks have burned themselves alive this year alone. It was not easy to get Tibetans to talk with me, and I certainly didn’t blame my driver/minder for sticking to his tourist script. Still, when they did talk--out of sight or hearing of anyone who looked Chinese--most Tibetans made it clear how much they hated the Chinese for invading their country, but even more for deliberately trying to destroy their culture and their way of life.

My itinerary on this trip was tightly controlled and my papers checked at the police and army posts that dotted the country like sheafs of barley. My e-mails were monitored (type in “Dalai Lama” and my Internet Café connection would suddenly disappear). There was no Facebook or YouTube, and Google searches were heavily restricted. I kept all my handwritten notes in a personal code on food wrappers mixed in with my dirty socks.

What’s next for Tibet?

China will never willingly cede political control to the restive Tibetans. Nor are they likely to change a basic strategy of assimilating Tibet into 21st century China, until the Tibetan culture is nothing more than a colorful artifact.

Still, the Chinese must be worried about an “Arab Spring.” The Chinese are right to fear the power of the monasteries to move angry people to rebel in ways that would catch the attention of the world. If the Tibetans are willing to make the sacrifices, there could indeed be Tahrir Squares here. And that would force the Chinese to either stop their assaults on Tibetan culture--or lay down a violent suppression that would bring them global condemnation. What the world thinks of their actions in Tibet may not have mattered to China twenty years ago. But with the Beijing Olympics, China announced its presence and involvement in the larger world. At least China’s younger and more progressive leaders understand that what they do at home now is judged in ways that can seriously affect their ambitions on the world stage. And that does matter—to them, to the Tibetans, and to us.