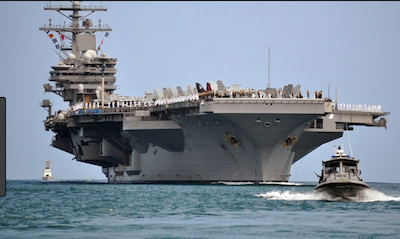 How Close Are We to War with Iran? —Waiting for Gulf of Tonkin II

Donald Trump has just sent a carrier battle group into the Persian Gulf, warning that a fight with the United States would "be the official end of Iran." Do you trust that Trump and the inexperienced sycophants around him can make the sophisticated judgments needed to stay on the knife edges he creates without falling off? As a former Foreign Service Officer, I know I don't. Have you read enough history to know that a single assassination in Sarajevo a century ago started a World War that nobody really wanted or was prepared for?

Trump’s strategy for dealing with global opponents is now familiar: start with escalating bluster, insults and threats to unsettle his foe. Then ratchet up the tension, for example, by sending US warships into his opponent’s backyard. Then dampen the provocative actions and rhetoric just in time for his stunned foe to offer concessions that would not have been offered otherwise—all the while trusting that his superb negotiating abilities will let him go to the very edge of a disaster without actually creating one. Hey, it worked with condo owners in New York City. But the worst that could happen there was another bankruptcy. Stumbling into a shooting war with Iran would be a global disaster.

North Korea, of course, has famously called Trump’s bluff and come out ahead. Kim Jong Un has gained what his father and grandfather failed to gain—and what he wanted all along—a place on the world stage. And he got it without giving up anything of real value in return. Do you think Russia, Iran and China have not been watching?

Well then, Trump believes, let’s just squeeze these evil-doers with sanctions until they bend the knee. But America’s adversaries are proud peoples under tight state control, and they will suffer far more pain without flinching than Trump thinks they will. We, on the other hand, still live in a system where opponents have a voice, and patience has never been one of our virtues. Iran in particular is no doubt confident they can wait us out, expecting Trump to overreach going for a quick “win”—and be rejected by his own people. Think North Vietnam.

Still, with grown-ups like Jim Mattis replaced in the Trump Administration with warhawk lunatics like John Bolton, and given the abject failure of a Republican Senate to exercise its responsibility for enforcing Constitutional checks and balances, there is little to impede Trump’s misadventures. If sanctions take too long to work, then send in a carrier and wait for a “provocation.” Or create one. We are told now, without proof,that some Iranian merchant ships are carrying “weapons” to unspecified locations and that we should react. Are you old enough to remember how the Gulf of Tonkin incident “justified” what became a half million American troops in Vietnam? Surely you recall the “weapons of mass destruction” that let neocon bullies like Dick Cheney and Paul Wolfowitz launch the Iraq war?

But, but—Iran is making a nuclear bomb! Yes, they were definitely on that path. The Obama treaty that Trump withdrew from was not perfect, but it kept Iran from making the components of nuclear bombs for 15 years, time for continuing negotiations and internal changes as a more progressive and worldly group of young Iranians continues to push for less hostile relationships with the West.

Now Trump has moved the goalposts clear outside the stadium by demanding that Iran must not just suspend building its nuclear capacities but be completely and permanently stripped of them. In addition, Iran must end its support for factions in the region that irk the US (such as Hezbollah in Lebanon and the Houthi rebels in Yemen) and basically stand down on its legitimate ambitions as a regional hegemon. Oh, and Trump would really like the Iranian people to overthrow their current leaders

The Iranians would rather eat sand. And their non-nuclear military capacities, added to their size and the level of sophistication of their population, would make them a military foe equal to Vietnam, Iraq, and Afghanistan combined.Iran has been a power in its part of the world for millenia. Now Trump demands that Iran become his lap dog. No Iranian government could ever agree to that diminution of their nation’s position in the world.

For sure, we, with our allies, need to slow Iran’s nuclear ambitions while understanding that—facing a nuclear Israeli threat—Iran will continue to see nuclear weapons as an existential priority. And we need to adroitly block and parry Iranian adventures where we can. But we also need to recognize that Lebanon, Syria, Iraq and Yemen are in Iran’s backyard and that significant Iranian influence over its neighbors is inevitable. At the same time, however, we need to play a longer game, recognizing that it is in our long-term interest to build stable relationships in this part of the world so far from us. We should respect Iran as a legitimate regional force—a culture and a people who were a world power 2,000 years before Columbus sailed.

Finally, if all this isn’t enough to worry you, it’s clear from two years of watching this man that the single biggest factor driving Donald Trump’s strategy for Iran is not geopolitical reality but his certainty that threatening war will energize his political base. Indeed, the closer he carries this calculus to the brink, the more excited that base will become, like watching hot-rodders playing “chicken” in a 1950s movie.

At least unhinged advisors like Bolton frame their misguided arguments around geopolitical factors they actually believe no matter how wrong they are; Trump believes in nothing but his own psychotic need to win. So he’s all too likely to drive straight off the cliff. And he won’t be the one to die.