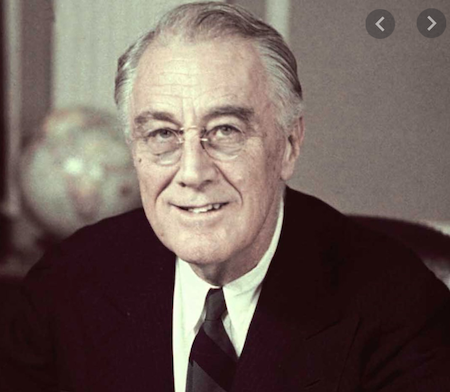 Is Joe Biden Our FDR?

Is Joe Biden Our FDR? You may think, Well by God he is! Or you may see him as a socialist demon. Well fine, it’s a free country and I really want to spark respectful, fact-based discussions by these weekly talks.

Let’s start with the basics. We are in the worst peacetime crisis in a century. Lots of people are scared, depressed, frustrated, pissed off, or all of the above.

And last Thursday night this new American president starts a speech to the nation by telling us he understands our pain about what’s been going on, from dead friends and relatives to closed businesses and lost jobs, to going nuts trying to homeschool our kids.

He even pulls an up-to-the-minute count of Covid deaths out of his jacket pocket. Sure, that could be seen as a savvy, calculated move, but—as cynical as I am—I didn’t doubt that it was also a mark of his genuine deep concern.

But then Biden pivots and starts reeling off facts about ramping up the production and distribution of the vaccine. He says if things continue to go right, we could be back to some kind of normalcy, flipping burgers by the Fourth of July.

Did you believe him? After al the Covid lies from his predecessor, Biden came across to me as earnest, honest and caring.

Biden ends his speech by describing the $1.9 trillion American Rescue Plan that Congress has just passed without a single Republican vote. It’s the largest expansion of the social safety net since the Great Society initiatives of the 1960s, and it changes everything.

Biden tells us in language anybody can understand how this Plan will make actionable change in Americans' lives, especially those who are poor or who’ve been made poor by the pandemic.

There are billions of dollars for personal protective equipment and vaccines. But most important are the measures to help ordinary Americans struggling with the economic impacts of this pandemic. They are a full-court press against the nation’s long-growing disparity between the rich and the poor, now worsened and magnified by this crisis.

The poorest fifth of households will see their income rise by 20 percent. Child poverty will be cut in half. There’s a huge expansion of health insurance subsidies that will reduce the number of uninsured people in the United States by more than four million. There’s support for struggling small businesses and for states and cities whose budgets have been busted by the pandemic. There’s $25 billion in emergency rental and housing assistance to keep Americans in their homes and off the streets. The list goes on.

Listening, I noticed that Biden described all this without crowing—just clearly and confidently describing these ways in which competent, proactive, intelligent government can really make things better. Instead of telling us how essential hewas, he did the unthinkable in today’s self-promoting world. He asked for our help. He told us he could not lead us out of this abyss without our help. And he meant it.

Tell me—me—a guy who’s faced down threats all over the world, from Vietcong to KGB assassins—go ahead, tell me I’m naive, but, yeah, I loved hearing all this. In fact there were tears running down my face and they were not just because of the good news on vaccine delivery and economic relief.

No, what touched me that much was the character of the man who delivered it. The man behind the desk where the Covid buck has finally stopped.

There’s no question I’d gotten more cynical over the last four years of watching an angry, lying, self-pitying narcissistic bully cover his ass, caring about nothing but himself, leading a bunch of incompetent sycophants who never saw a problem they couldn’t make worse.

So what a change, to a president reassuring me, not by flexing his muscles but by flexing his heart, by promising to tell me the truth and then doing it, by hiring smart, tough, independent-minded people to work with him instead of incompetent boot-lickers he could feel superior to.

Like 81 million other voters last fall, I’d hoped Joe Biden would win, mostly because I didn’t think the nation could survive another four years of Donald Trump.

It seemed to me that a 78-year-old President Biden would be a calm placeholder. That judging from his long voting record in Congress he would continue the slightly left of center, same-old same-old, chipping away at big problems as his Democrat predecessors have. The best I expected was a third Obama term.

Instead we got a revolutionary.

Too strong a word? Consider this:

With the passage of this bill, and what will follow it, the whole paradigm of the role of government in American life is shifting.

For the first time in a long time, this bill puts working people in this nation first and gets money to them first. The Plan is an engine for getting the economy going from the bottom up, reversing the old right-wing lie that helping the rich get richer would mean “trickle-down” improvements for the poor. Never worked, never will, and the right will never stop trying to sell the lie.

The Biden Administration is reversing a contempt for active government pushed by Ronald Reagan, and echoed by generations of pro-rich Republicans. Biden and his team are boldly acting on the premise that Washington is able to provide the help Americans need in a crisis and that active, compassionate actions by government are essential to reducing economic insecurity and inequality.

The Rescue Plan should put the last mail in the coffin of not only “trickle-down economics” but also of another Republican myth—that deficit spending, even massive deficit spending, in a time of crisis will automatically cause rapid inflation and destroy the economy. It hasn’t. It won’t. Watch how this unfolds. You’ll see.

Add it up. It’s a revolution.

As to the politics of it: three-quarters of Americans support the this newly passed Rescue Plan, including 60 percent of Republican voters. This wide popularity stems in large part from the bill’s design.

Because of—not in spite of—its massive scope, the Rescue Plan can largely sidestep challenges that it’s just a left-wing wish list. It assumes, correctly, that a huge percentage of Americans in this crisis can use a helping hand—and gives it to them. It’s straight out of FDR’s playbook, when that wily president insisted that Social Security be universal, not limited to the poor, so it wouldn’t be tarred as “socialism.”

As more smart politics, Biden did not repeat Obama’s mistake in sacrificing speed and scope to pursue impossible dreams of bipartisanship. When Republicans offered a counter only 1/3 as big as the bill Biden wanted, he very politely told them to take a flying leap and got his bill passed without a single Republican vote.

When the bill passed, I wish I could’ve seen the faces of every single one of those Republican representatives and senators who voted against it. How will they campaign in 2022 and 2024 as the virus recedes into the rearview mirror, as more people have jobs, as their personal situations dramatically improve?

Will Republicans still be able to convince voters that there’s no place in this country for active, compassionate, competent government?

Of course, Donald Trump and his angry white supremacist base will do their best to keep the culture wars hot, but race-baiting, immigrant-bashing and truth-trashing have their electoral limits, as the 2020 vote showed.

And more open-minded Trump voters, no longer under siege by the pandemic and feeling the effects in their pocketbooks of a resurging economy, are going to be less fearful, less angry, less willing to vote with the radical right.

I’m eager to see what Biden does next—on rebuilding America’s crumbling infrastructure, reshaping immigration regulations, reforming election law, and all the rest. None of it will be easy, with a 50-50 Senate.

And Biden’s going to make mistakes—he already has, as I said last week, by looking away from the Saudis’ murder of journalist Jamal Kashoggi.

What do you think? About what Biden has done so far? About what he should do next? Please offer your ideas in whatever venue you’re seeing or reading this.