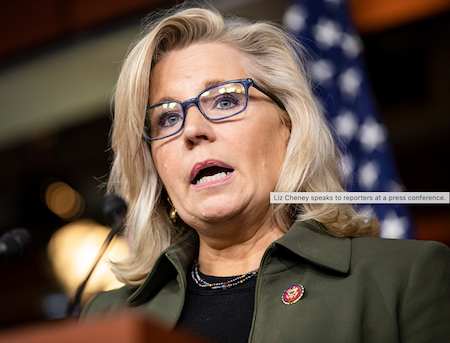 Is Liz Cheney a Hero?

Let’s talk about courage. For the last 35 years I’ve helped lead a global movement that inspires people to stick their necks out to solve tough public problems. So I’ve got some standing on the matter of what’s courageous in public life.

Let’s look at a woman many people in the last few weeks have cited for her courage.

Of course I’m talking about Liz Cheney, the far-right congresswoman from Wyoming, the daughter of Dick Cheney, the former vice president, an architect of the Iraq war, a pro-corporate, small-government warrior who was pleased to be known as the Darth Vader of American politics.

Until very recently, Liz Cheney seemed to be a chip off the old block. She was and is a pro-gun, anti-abortion, anti-regulation, small-government, deeply conservative Republican—pretty much the antithesis of my own politics.

But she represents her conservative state honestly enough and she fights hard for what she believes in. To have called her courageous until last winter, however, would’ve been a stretch. A committed bare-knuckle right-winger would’ve been more like it.

Then came Trump’s loss in the 2020 election and his relentless, unprincipled efforts to overturn the results by subverting the Constitution and inciting a violent attack on the Capitol.

As you know, all but a handful of Congressional Republicans spinelessly continue to support Trump and his lies and his attacks on the rule of law, so concerned are they about losing his support and that of his political base.

These cowards have let the Republican Party become the property of a narcissistic, unprincipled fascist—the country and its founding principles be damned.

But then up pops Liz Cheney, calling out Trump and his false narrative about the election, condemning him for his role in fomenting the January 6 Capital insurrection, voting for his impeachment, and expressing a passionate allegiance to the rule of law and to democracy.

She did all this knowing full well that her boot-licking colleagues in Congress would strip her of her powerful leadership post in the House and that they, and Trump, will do everything they can to end her political career. Undaunted, for the last month Cheney has doubled down on her attacks on Trump and on his Congressional Republican toadies.

If Liz Cheney is crazy to charge this windmill—as even some of her supporters must think—then I say she’s crazy like a fox. Congressional Republicans played right into her hands when they took away her formal post within the Party. They’re playing checkers and she’s playing 3-D chess.

The Republican House leadership may have tossed her out of their inner circle but they could do nothing to silence her, and in fact, by making her such a public figure, they’ve greatly boosted her capacity to divide the Party and hijack news cycles. They’ve magnified her threat to undercut any Republican efforts to put forth a cohesive and effective political program based on anything more than slavish obedience to a defeated leader who not only didn’t win the White House, but also cost them their control of the House and the Senate.

And that’s just on Capitol Hill. The ouster of Cheney from her leadership post gave her precisely the megaphone she needs to take her beyond being her father’s daughter. Now she’s a national figure, with far more impact in taking her case against Trumpism to the country.

The Trump toadies who now control the Republican caucus in Congress have got to be terrified that Cheney’s loud stance against the embarrassing cowardice of her fellow Republicans will help Democrats tar any Trump acolyte they run against with ties to a despot who tried to steal an election.

And Cheney’s goal? Well, it’s complicated. She says she’s acting to protect democracy and the rule of law and I believe her.

But it doesn’t take a political genius to also see that being such a loud voice for the growing numbers of conservatives who oppose Trump can put Cheney into leadership of that movement, a movement that could well break the Trump fever before 2024. The risks she’s taking now could be the stroke of genius that gets her the Republican nomination for President. Crazy like a fox.

A week ago for example, 150 former Republican governors, members of Congress, Cabinet officials and senior administration officials, along with strategists and grass-roots leaders, issued their own declaration of independence with an explicit threat to leave the party and start a new one if the GOP does not abandon its fealty to Donald Trump and his lies.

Sure, it’s just words right now, and mostly by people out of power, but it links up with other Never Trump efforts like the Lincoln Project. Now they’ve got Liz Cheney as a savvy, tough and inspirational avatar and potential leader.

There are many American conservatives who believe in both democracy and a conservative agenda—less regulation, more restraints on abortion, few gun restrictions, tight border security, strong support for police departments and churches. These Americans no longer have a home. Liz Cheney and her allies could provide them with one, through a renewed version of the Republican party without Trump, or a third party based on traditional conservative goals.

We won’t have to wait long to measure their impact. The midterm elections are only 18 months away. Trump’s hold on the Republican Party will be tested, first with the Republican primaries next spring and then in the general elections for House and Senate seats in November.

Going back to Liz Cheney, the catalyst for much of this.

Is she some icon of courage, some Joan of Arc—or a master political manipulator—or both?

My experience is that the courage of real heroes is often brought forth by a specific, usually painful, event or challenge. Ideals that may have lain dormant for years, unheeded in their daily lives, suddenly propel them into action.

The insurrection may have been that for Cheney.

I also find that the courageous people most likely to achieve their goals are fueled not just by their passion for an ideal. They’ve also spent considerable time and effort gaining and practicing the skills that will increase their odds of success. Cheney’s grown up in DC politics, worked her way to a high position in the party, learned how to get votes and work the halls—she’s got some chops.

Finally courageous people don’t have to be saints or geniuses. They may take courageous actions after decades of being no better than mediocre. And then suddenly, like the 17-year cicadas, it is their place, their time, their opportunity and they emerge, rising to the occasion, taking their place in history.

I would shudder to think of her archconservative views charting the course for this country and shudder even more if she became President.

But for now, Liz Cheney is my hero.

And if you doubt the importance of all this, House voting records show that for four years Liz Cheney aligned her House votes with Donald Trump 95% of the time. The opportunist who replaced her in Republican leadership voted with Trump only 55% of the time but has since become a fervent Trump acolyte.

The point could not be clearer. Policies no longer matter to today’s Republican Party. The only thing that matters is allegiance to Donald Trump. The Republicans are no longer a political party.

They are a cult.