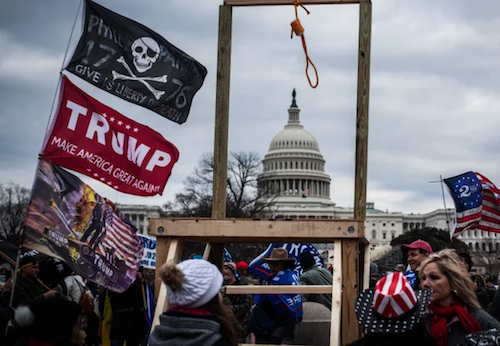 Landslide, by Michael Wolff, describes Donald Trump’s increasingly unhinged behavior after his election loss. In I Alone Can Fix It, Carol Leonnig and Philip Rucker detail how the top US military officer, Chairman of the Joint Chiefs Gen. Mark Milley, was so shaken that then-President Donald Trump and his allies was organizing a coup that he and other top officials discussed ways to stop him.

We now know from many sources that the paramilitary groups that spearheaded the assault on the Capitol on January 6 we’re no disorganized rabble. Many of their leaders were military and police veterans, and they had a plan. They knew that using a mindless mob to delay the formal counting of electoral votes by a few hours would not keep Trump in power.

They knew they had to aim higher. Much higher. They came within minutes and feet of their stated aim of capturing or killing Vice President Pence and Congressional leaders. At a minimum, they planned that their show of force would lead Congress to throw the election into the House of Representatives where Trump would be declared the winner.

They also figured that if they could create enough confusion and chaos, they could give Trump the political cover he needed to invoke the Insurrection Act which would allow him to call out the military, sparking armed conflicts all over the country. In the ensuing panic Trump would declare himself the winner of the November vote.

This was not mob violence. This was treason, using mob violence as a battering ram and as a cover for overturning an election, handing the presidency to Donald Trump as a de facto dictator. Had the plan succeeded. America would have ceased to be a democracy.

In I Alone Can Fix It, General Milley is quoted viewing Trump as "the classic authoritarian leader with nothing to lose,” and repeatedly drawing parallels between Adolf Hitler's rhetoric as a victim and savior and Trump's false claims of election fraud. "This is a Reichstag moment," Milley reportedly told aides on that fateful day.

Of course it was more than a “moment.” The threat to our democracy did not appear from nowhere on January 6. It began with Trump’s first brazen attempt to declare himself the winner on election night—before mail-in ballots had been counted.

It continued with Trump’s continuing claims of electoral fraud that did not exist, frivolous lawsuits and a complete co-optation of right-wing media to further the Big Lie that Trump had won the election. Trump’s mesmerizing hold on at least several tens of millions of his followers only increased despite his legal defeats.

All this led to his speech to his Brownshirts at the Mall on January 6, directing them to go to the Capitol, trash the Constitution and confirm him as President for at least the next four years,

How extensive was the plan? That investigation is still ongoing but you don’t have to be a conspiracy theorist to wonder why the attack’s leaders seemed to know the Capitol layout as well as anyone who worked there, why 2/3 of the Capitol Police Force was not on duty that day, why most of them were unarmed and without riot gear, why barriers and fences were as flimsy as they were and why it took three hours for reinforcements to arrive. We may never know the extent to which at least several members of the House were advising and abetting the attackers.

You have to hand it to the insurrectionists; they made the unthinkable thinkable, and in so doing energized the new Administration and many others to rethink the whole nature of domestic threats and to take the actions needed to keep January 6 from ever happening again.

It’s good to see the massive effort now underway to round up and convict the Capitol attackers, from leaders to foot soldiers.

But we need a more permanent solution that addresses a broken politics in America that still leads so many people—in anger, despair and ignorance—to follow a Donald Trump all the way down to his vile fascist roots—a passionate embrace that drags with them the spineless leadership of a Republican Party that supports passing laws and policies in Red States everywhere that make it harder to their opponents to vote. So while better security measures now make another physical assault on government less likely, the danger very much remains that Trump acolytes could game their way to power through a corrupted voting process.

The answer is two-fold. First, Congress needs to pass tough national protections of voter rights, legislation that will only happen if the Senate filibuster is overturned. Stay tuned on this one.

The other necessary move— the Biden Administration needs to continue to push forward policies and programs that meet strongly felt needs from citizens of every stripe — pandemic relief, child care, job creation and modern infrastructure support, from roads to broadband. By relentlessly demonstrating that government can be a force for good in people’s lives, Biden can defuse enough of the anger and cynicism that now divides the electorate to re-set the country on a forward-looking, people-serving, Constitutional path.

Perhaps nothing can be done to reach the Trump bitter-enders, but at least their impact can be blunted enough to send many of them back under the rocks from where they came.

A tall order, sure. It can work if Biden and his team continue to press their case with the political savvy, energy, and communication skill they’ve shown so far. With the balance of voting power in both the House and the Senate extremely fragile, there’s no margin for error.

Biden seems to be gaining at least grudging support from his own left wing, never a sure thing. A bipartisan basic infrastructure bill is a strong possibility. And Biden can still rely on parliamentary maneuvers in the Senate to skirt the filibuster to pass the bulk of the multi-trillion-dollar agenda that will actually improve Americans’ lives.

A voting rights bill and serious gun control legislation will only pass if the Democrats who control the Senate end or significantly amend the filibuster which now gives enormous power to the minority party to block legislation.

We need to pay attention. This not some stage show we’re watching from the back row. Every single one of us has skin in this game. Democracy itself is on the line.

Watching right wing media endlessly parrot Trump’s lies, listening to the cheers the man still receives, noting the almost unbelievable cowardice of the Republican party in not ending the threat Trump still poses to constitutional government—the hill can seem too steep to climb.

But climb it we must, you and I. We can’t falter in supporting brave, honest, compassionate leadership committed to a constitutional democracy. It will not survive without our words, our resources and our votes.