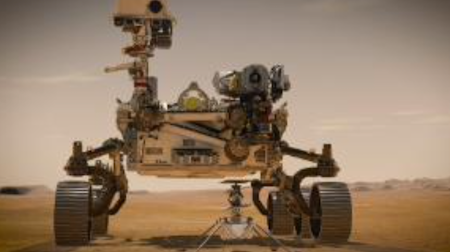 Mars, Science and the Future of Reality

I’m betting that much of your attention this last week was on quarantines and masks, and on scrambling to get a vaccine appointment.

If you’ve had time for politics, there’s the chess matches in Congress over President Biden’s $1.9 trillion Covid relief bill and a few of his more controversial nominations for top jobs.

With all that going on, did you also see the reports on the landing of the Perseverance rover on Mars? It was glorious.

The ingenuity, precision and perseverance of what NASA’s scientists have done seem almost beyond belief—even to me, a trained scientist.

First, this SUV size vehicle has to get to Mars and then be gently lowered onto the Martian surface—without busting any of its thousands of delicate components—in precisely the right place in an ancient lake bed.

NASA engineers have programmed the rover to travel miles over the next few years. Its movements will be guided by high-resolution cameras aboard a drone the engineers built to fly in the thin Martian air.

In one of its first assignments, the rover will drill down for samples of whatever used to live in that ancient lake—maybe not a smallmouth bass. They’d be happy to find algae or any other organic matter. That would raise the plausibility of humans living on the red planet someday.

If your interests focus on our own hunk of the solar system, then consider what science did on planet earth over the last 12 months with the development of not one but several Covid vaccines—far ahead of schedule and of an effectiveness scientist hoped for but did not dare to predict. They will save hundreds of thousands, perhaps millions of lives.

The Mars rover and the Covid vaccines show us the extraordinary power of the human mind and spirit, of science and of critical thinking.

And then there’s Texas. The collapse of the Texas power grid in a snow storm was a completely avoidable disaster, caused by the stubborn refusal of generations of Texan leaders to accept and use science. They dismissed the reality of the climate crisis and the inevitable increase in vicious storms like the one that hit Texas. They made no attempt to protect natural gas transmission lines or stockpiles of coal from freezes that science predicted. Texas politicians, operating as loners in the Lone Star state, even insisted on a Texas-only power grid, unconnected to the national power grid that other states have as backup.

Ignore reality, and it will slam you into a wall.

The anti-science templates for decision-making that just crippled Texas are a microcosm of what happened in the entire country over the last four years. National leadership not only treated science as “just another opinion” but shamelessly undermined experts and dismissed facts in order to serve preconceived political agendas. Honest scientists within federal agencies were muzzled, demoted or fired.

Donald Trump and his anti-reality cohort have done great damage. Far too many Americans have accepted their evisceration of any common conception of reality, any respect for science, any use of critical thinking. Other presidents have lied, but Trump’s ability to completely envelop his followers in a cocoon of lies is unparalleled. He leaves behind tens millions of people deeply skeptical of facts and professional analyses and sure that his lies are truth.

Is there a way back to reality-based public life?

The Perseverance rover and the development of vaccines demonstrate that science—even keeping its head down for the last four years—is still alive and well, and can do remarkable things especially when scientific and political objectives coincide, as they did in the rapid development of the Covid vaccines.

And now, scientific debate and discovery no longer have to be conducted in the shadows cast by ignorant ideologues.

But what about the mass assaults on truth and facts demonstrated in the Texas fiasco, in QAnon, and in those fools who believed in the Trump landslide and really thought that storming the capital was an act of patriotism?

Is there a way to get people to look more critically at issues? To weigh evidence from outside their bubble chambers, including from science?

What if there are rivers of real, credible evidence they can’t dismiss, whether they be Proud Boys in South Dakota or the governor of Texas. I hope that NASA starts sending out pictures every day—half of them from Mars and half of them of the scientists and engineers that made it all possible. Humans did this. Experienced, reality-based, professional people did this.

There are Covid graphs showing that we’re heading in the right direction. Every one of those charts should be accompanied by images of the scientists and managers who created the vaccines that are saving our lives.

What for sure doesn’t work is shaming. That only hardens the beliefs that “elites” are full of disdain for real people. What works better with the anti-facts crowd is hearing the truth from authorities they might already have at least some trust in. For example, one of the few credible counters to those sure the November election was rigged was the flood of interviews with election officials, many of them Republicans in red states, affirming the integrity of the counts they supervised.

And there are some institutional remedies possible. Public and Congressional pressure forced the social media giants to clamp down on the worst of the lies they were transmitting about politics, the pandemic and the climate crisis— but it was and is a feeble effort. Keeping the heat on may yet result in more significant and more permanent regulations.

And Congress has got to renew the Fairness Doctrine. Established by the FCC in 1949 it required the holders of broadcast licenses to both present controversial issues of public importance and to do that in a manner that was, in the FCC’s words, “honest, equitable, and balanced.” Ronald Reagan ditched that sensible rule and now we need to bring it back, expanded to include social media.

But if messaging doesn’t get through and institutional changes are too slow, what then? How do you deal with people who have willingly suspended their own ability to think critically?

Maybe all we can do is outvote the resolute Aryans, frightened that they’re becoming a minority. If their candidates don’t make it into office, maybe they’ll retreat, back under the rocks Trump turned over.

For many, many others, a safer, better life could coax them to experience a new reality, a less isolated, less angry, less fearful, less willfully ignorant one.

What if the Biden Administration could make quick and effective progress in solving problems important to all Americans, such as ending the pandemic, creating jobs and improving infrastructure?

A federal financing of infrastructure repairs and new construction would put hundreds of thousands of Americans to work, building together.

A successful federal rollout of mass immunization operations is going to lower the pandemic’s devastating impact, making the world less dangerous than it now is.

The realities of new jobs and a defeated pandemic will dampen the anger and fear that Trump rode to victory. People will experience the reality that we’re all in this together and together we can work out way to a better nation.

All that helps rebuild community, challenges fact-less stereotypes and lowers the political temperature enough for at least some on the radical right to think more critically.

Think of us as Perseverance, the Martian rover. We’ve just landed after a long journey through dangerous space. We’ve checked our systems. Now we’re good to go, in search of the reasonable political life we need to create, in an atmosphere that’s been drained of oxygen for four long years.