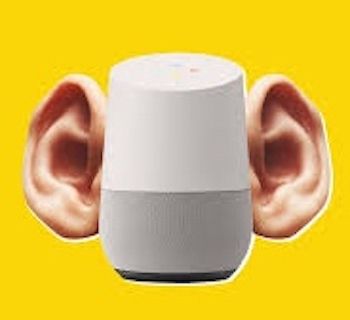 Pulling the Plug on the Spy in the House

A year or so ago, a smart speaker came into the house as a gift when my wife Ann subscribed to the New York Times. I was agin it but Ann and her son David got it set up to say “Good Morning” and report the day’s news and weather, play podcasts, and radio stations anywhere in the world and—with the addition of a bunch of special plugs—to turn the lights on and off here in the living room.

I had to admit that lights-on-and-off thing was nice. Nevertheless I grumbled a lot about having that thing listening all the time. Ann’s response was to quietly put mini speakers in other rooms, so she could get answers to questions and listen to Radio Lab anywhere in the house. She didn’t go as far as some people—our devices didn’t control the heating system or house locks, although David did threaten to turn the lights in this room on and off from his phone 40 miles away.

So we’d been at an impasse. Me grumbling, Ann going right ahead with the convenience of it all.

Until dinner the other night. She’d said, “Hey Google, play Brahms” and it was doing that.

But then something very strange happened. We were talking about the day’s news when the music stopped and the damn smart speaker apologized for not being able to understand a word I’d just used.

But nobody had asked it to monitor our conversation, let alone join it.

The instructions for the device when we got it said that we had to say ”Hey Google” before the device would wake up and then obey the subsequent command.

But our only “Hey Google” prompt that evening was for it to play music.

Yes, I understand that a smart speaker has to be listening for a prompt all the time so that it can then perform the task requested.

But this time the device reacted without any prompt at all. It was listening to our entire conversation and doing its level-best to understand and interpret what Ann and I were saying.

After all the months of smiling and ignoring my grumbling, Ann stood up and pulled the plug on the too-damned smart speaker.

I went into the living room and unplugged all the connections to the system that turn the lights on and off. (I’ll actually miss that one.)

Ann and I aren’t into conspiracy theories, but I looked deeper into what these speakers do with what they hear, now that it was clear ours was listening without being invited to. And they are indeed storing all that sound.

Amazon, Google and Apple all admit this but say they “take the security of customers and their voice recordings seriously.” And they have measures in place “to prevent employees and contractors from abusing their access to customer voice recordings.”

Right, and if you believe that, I’ve got a bridge in Brooklyn to sell you.

The hell I will. If we’ve all learned anything over the last few years, it’s that nothing is secure on the Internet, no matter what Google, Amazon and Apple may tell us. It’s all hackable so privacy isn’t possible for anything online. Semi-bright teenagers in Cincinnati or Bucharest can hack into Google and get information to sell to anyone with a few bucks.

And that matters. Ann and I may be old but we’re active in the world, advocating for courageous involvement in public life, honoring the world’s political and social heroes and telling their stories through the Giraffe Heroes Project.

I work with activists in some of the most repressive regimes on the planet, coaching them on how to stop injustices. There are people who would like to shut me up. And hearing my privately spoken thoughts and tracking my home address is not something I want to make easy for these yahoos.

Locally, we’re blue on a rural island where the resident reds have been encouraged by Trump to get way more visible about their objection to anything liberal.

We’ve been warily watching the incursion here of national right-wing extremists that may be planning to make this island the next Malheur Refuge—a base from which to spill their bile, unsettle locals and organize violent actions. Anti-mask, Covid-is-a-Hoax, Trump-Won-the-Election people are showing up on the streets, driving flag-waving trucks along the roads, and accosting locals on the sidewalks.

Ann and I thought we were out of reach in our home, deep in the woods. But that’s not true if a monitoring device is picking up where we are and what we say.

I’m willing to put up with a lot of the stuff current tech is throwing at us. If some algorithm figures out I love to climb mountains and I get ads for ice axes and warm gloves well—fair game. And since my political preferences are no secret, and I'm buried in funding pitches from Democrats but not Republicans, well, no surprise there either.

I can live with that. But what Ann and I discovered at our dinner table was that, with a smart speaker, our house is bugged 24/7.

So do I have to go out on the lawn to talk about strategies for a political campaign I'm working on ? Really? In my own home?

No way. So hello Dumb Home, home /sweet /private /dumb home. We have opted out.