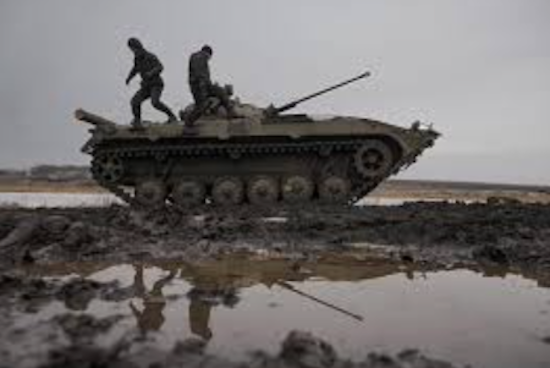 But I was not as wrong as Putin, who grossly underestimated the strength of Ukrainian and global resistance as well as overestimating the capacity of his own forces to overcome it.

In the north, Putin’s forces have made far less progress than anticipated. His attacking columns have often been tactically clueless, poorly supplied and undermotivated, using tanks and trucks so poorly maintained that they don’t dare leave paved roads in the middle of Ukraine’s annual season of mud.

In the south, Putin’s forces have made better progress, but only because they’ve shifted tactics from infantry attacks to wholesale and often indiscriminate bombing and shelling of civilian populations.

Throughout the country, Ukrainian resistance continues to be far fiercer than the Russians expected, bolstered by determined citizen militias fighting to defend their home turf and inspired and led by a media clown who is rapidly becoming the Churchill of our times.

With his boots-on-the-ground blitzkrieg making poor headway, Putin has unleashed Chechnya-style air and artillery attacks on cities, a tactic meant to pound the Ukrainians into submission even at the cost of drastically increasing civilian casualties—all graphically shown on the Internet where they deepen Russia’s rapid transformation into global pariah.

The Russian military have apparently gotten so frustrated that—confirmed by multiple sources—they are now advertising for Syrian mercenaries to help them out.

Beyond the battleground, Putin must also be surprised by the strength and depth of international opposition to his invasion.

A month ago NATO still seemed an organization in search of a purpose, thoroughly skeptical of US intentions and leadership after four years of insults and battering from Donald Trump.

But within days of the first attacks, the organization achieved a level of cohesion and efficacy that had not been seen since the Cold War, coordinating tactics, arm supplies, cyberwarfare and financial assistance. In particular the new German leadership has shown itself to be tough and creative, abandoning decades-long German reluctance to supply lethal arms outside its borders.

A month ago Ukraine seemed to be on everybody’s list as a corrupt and chaotic state, poorly led and poorly motivated. Most Americans couldn’t even find it on a map. American policies toward Ukraine seemed entirely determined by American domestic political interests and rivalries. Many Americans knew of Ukraine only as a pawn in Donald Trump’s first impeachment trial.

But now Ukraine may be the only glue bringing Americans together, including a fierce bipartisan response from Congress. Yellow and blue flags are everywhere. American companies and other organizations doing business with Russia are quickly pulling back contracts and investments.

A month ago, the European Union seemed as focused as ever on its pocketbook, highly unlikely to endorse actions without a clear economic benefit.

But within days of the invasion, the EU began approving major expenditures for arms to Ukraine and coordinating the reception of refugees.

A month ago, Putin was confident that he had “sanction-proofed” the Russian economy and, in any case, that the expected sanctions by the West would, as usual, be long on rhetoric, with bearable economic impact.

But to the surprise I think even of themselves, the European Union, United States, Canada, Japan and other major economic powers have quickly accepted the sacrifices to their own economies and agreed to a set of closely coordinated sanctions so crippling that Putin on March 5 called them a “declaration of war.”

Sanctions have largely cut off the Russian central bank’s access to its $600 billion stash of “sanctions busting” foreign currency reserves, making two-thirds of them in effect worthless. That makes it much harder for the central bank to support the ruble, to offer foreign-currency liquidity to Russian banks and to make or receive foreign currency payments for Russian companies.

This morning President Biden announced that the US would stop buying Russian oil and gas and our European allies have reportedly agreed to a drastic reduction in their own purchases. This huge step undermines the core of Russian economic security.

Hit by sanctions, the ruble and the Russian stock market have tanked.

The West has cut off most Russian access to SWIFT—a crucial means of supporting international money transfers, including purchases by ordinary Russian consumers. Last week chaos erupted on the Moscow metro as people could not use their metro cards to get through the turnstiles.

Actions by the major credit card companies have further crippled the ability of Russians to use their credit cards. With their banking system in peril, Russians are lining up at ATMs to draw out as many rubles as they can. Panic buying has been intensifying across Russia. Rising economic discontent is fueling demonstrations all over the country as ordinary Russians increasingly risk serious jail time for questioning the lies about Ukraine they are being fed by Russian state media. Arrests have reportedly now topped 13,000 people in 147 cities. Putin, despite his tough talk, cannot be indifferent to this assault on his image if not his power.

Western sanctions have cleverly targeted the weakest link in Putin’s chain of power, the allegiance of the billionaire oligarchs that feed at his trough. Sanctions now threaten many of them with financial ruin. They can’t access their financial holdings outside Russia. They can’t visit their villas in Tuscany. No more shopping sprees in New York or London. They can’t even fly out of the country. Now we are about to find out how strong their allegiance to Vladimir Putin really is. Several have already spoken out against the war. If enough of these very powerful people propping up Putin decide that he is more a risk to their interests than a benefit—Putin’s tenure is in danger and he knows it.

A month ago, Russia seemed to be holding its own in its PR war with the West.

Now Russia is losing that war big time, especially as stalled ground attacks give way to Putin’s use of bombs and artillery against civilian targets. Pictures of dead children and burned-out apartment building—and a huge fire set off by Russian bombs dropped only a few hundred yards from Europe’s biggest nuclear power plant—are driving media cycles from Singapore to Sardinia.

Putin makes a point of seeming not to care, but pictures of Ukrainian housewives training with Kalashnikovs, innkeepers converting their bars to make Molotov cocktails and those national flags hung and painted everywhere, graphically tell a story of the spirit and strength of the resistance. They mirror the dramatically effective media tactics and presence of their president Volodymyr Zelenski.

What happens next? As of March 8, highly motivated Ukrainian armed forces are holding their own against a larger Russian force suffering from logistic problems, poor motivation and tactical incompetence.

It seems that the spirit of Ukrainian resistance is unquenchable and that even if the Ukrainian army is formally defeated by the sheer mass of the assault, there will be a guerrilla war that will make Russia’s adventure in Afghanistan pale in comparison.

But the Ukrainian army is far from defeated. Its chances of success depend not only on the bravery and persistence of its soldiers and militias, but on its clever tactics based on knowledge of the home terrain, a steady supply of war material from the West and the grinding effects of an increasing tough sanctions regime that targets not just the Russian economy but Russia’s ability to sustain a massive military operation.

The transfer of Polish fighter jets to Ukrainian pilots, now being discussed by the US and Poland, would greatly enhance Ukraine’s ability to bomb and strafe Russian columns trapped on public roads.

The sanctions have already begun to bite in ways perhaps no one anticipated. My own sense is that Ukraine was the tipping point. After years of cluck-clucking and knuckle-rapping as tyrants big and small abused their own people and their neighbors, the Western democracies have finally seen Ukraine as the bridge too far. It was here that they would take their risks and make their stand. With my decades of experience in global security policies, I can think of nothing else to explain the passion and efficacy of the global response to Russia’s invasion.

So long as Putin continues his attacks, the United States, NATO, the EU and other global allies will ratchet up the sanctions regime.

Both public and private efforts in the media, business, culture and sports will continue to deepen Russia’s status as an international pariah. Putin may not care, but the Russian people will. The oligarchs will. At what point does Putin’s head appear on a pike?

Putin has angrily threatened nuclear war. Back in the “sane” world of last February, experts assumed that Putin’s threat referred to tactical nuclear weapons aimed at limited targets inside Ukraine—not a world-ending exchange of massive warheads. But for all we know, the man by now might be quite mad. In any case we must take his threats seriously. It’s not the Cuban missile crisis or even close to it—not yet. But this is only March 8. NATO’s nuclear war planners (I used to be one) are, I hope, losing sleep on this one.

Stay tuned. This commentary is moving as events are moving. And Lenin is right: there are decades of history happening before our eyes.