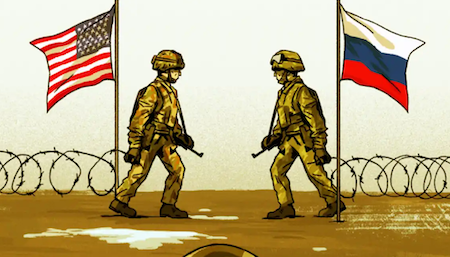 Putin is Bluffing in Ukraine: he thinks he can get what he wants without a fight.

125,000 Russian troops are poised on the border with Ukraine. The US has put 8,500 soldiers on “high alert.” NATO is sending jets and ships to the region as well as shipments of arms to Ukrainian forces.

After years as a NATO war planner, I know that one miscalculation by either side could mean a face-off between nuclear-armed opponents.

But this is no Cuban missile crisis—at least not yet. Putin is too smart to deliberately launch a full-scale invasion of the Ukraine, with all its risks and costs—not when he’s convinced that he can get what he wants without fighting.

Putin’s aims are political—and he intends to achieve them through a clever playing of his cards, with military threats his ace.

Most immediately, Putin wants greater Russian control over Ukraine, a country he sees as part of Russia, culturally and historically, and a place with enormous strategic importance as part of the land buffer between Russia and the rest of Europe. And he knows that a Ukraine that faced down Russian threats could be a model for other vassal states, like Kazakhstan (where Russian troops were crushing protests in January), to see how hard they can poke the bear.

But Putin’s aims go beyond regional fights. The man is determined to correct what he’s long viewed as a major catastrophe of the 20th century—the disintegration of the former Soviet Union, leaving what is, to him, an embarrassingly dim shadow of a once great empire.

Ultimately, Putin wants to turn the clock back 30 years to the days when the Soviet Union was a superpower and NATO and the Warsaw Pact—the Soviets and their client states—faced each other as equal powers across the Iron Curtain. Getting Russia back to that level of influence means not just blocking NATO expansion into Ukraine and drawing Ukraine back into Moscow’s orbit—it also means kicking NATO out of all of Eastern Europe.

Putin has seethed with every move by the United States and NATO to push the boundaries of NATO eastward following the collapse of the USSR. The Czech Republic, Hungary and Poland joined the Alliance in 1999. A dozen other states in Eastern Europe quickly followed, creating what Putin (and most Russians) regarded as an existential threat literally on their doorstep.

He’s got a point. If Russia established bases and alliances from one end of the Caribbean to the other, the US would certainly feel threatened.

But American warhawks, flushed with victory in the Cold War, have consistently and foolishly ignored this reality. With their major adversary dramatically weakened, the hawks went for the jugular, ignoring that Russia would inevitably regain her footing and fight back, destabilizing the region anew and installing tough new nationalist leaders, like Vladimir Putin, who quickly learned to use Russian anti–West fears and resentments as a springboard for personal power.

In 2008, NATO announced that Ukraine and Georgia would be invited to join the alliance too. That was a bridge too far and provoked such a furious backlash from Russia that NATO backpedaled, “postponing” plans for additional memberships. But in 2014, Ukraine sought an association agreement with the European Union, thinking this might be a safer route to the West than NATO membership. Moscow saw this move as a back door into NATO and reacted, annexing Crimea and backing a rebellion by eastern Ukrainians, many of whom wanted to be part of Russia.

When the West’s only reaction to these aggressive moves was modest economic sanctions, Putin saw he was facing a paper tiger. Now he’s decided the time is right to risk much bolder moves—using Ukraine as a pretext for throwing NATO out of eastern Europe altogether. Why not? Nobody has stopped him yet.

And why now? Putin sees the United States as seriously polarized and weakened at home and in retreat abroad. So he’s encouraged to keep raising his bets, hoping to use verbal threats and a massive military buildup to bluff his NATO opponents out of the game.

But NATO is starting to push back with a unity and determination that I don’t think Putin expected.

Diplomatic talks to end the crisis have so far been fruitless. Russian wants “ironclad” guarantees that Ukraine will never become a member of NATO, that NATO will pull back from advance positions in eastern Europe, and that America will withdraw its own forces and weapons from Europe, including its nuclear missiles.

The US has made clear its determination to defend Ukraine’s sovereignty and territorial integrity and the right of all nations to choose their own security arrangements and alliances. And the United States has no intention of removing its troops and missiles from Europe.

The pressures on the Biden Administration are intense. How the US handles Russia over Ukraine affects its ongoing efforts at rebuilding ties with NATO allies after the shredding they endured by Donald Trump. More broadly, an intensifying conflict in Ukraine tests the resolve of the Biden administration to restore international confidence in America’s global leadership, following Trump’s isolationist efforts to end it.

A NATO failure to foil Putin’s aggressive moves in Ukraine would establish Russia as a dominant, expansionist power in Eastern Europe and set a precedent for future action by other countries. It would encourage China to increase its threats against Taiwan. The regimes in Iran and Syria would conclude they are freer to use violence with impunity.

There are intense pressures on Putin as well.

The weapons NATO has sent to the Ukrainian armed forces will exact a heavy price on Russian invaders, just as Stinger missiles supplied to the Mujahadin crippled the Soviet adventure in Afghanistan. Should an invasion succeed, Russian forces would face ongoing losses to the citizen militias that are already preparing for a drawn-out guerrilla campaign against Russian occupiers.

Russians would not only suffer casualties—especially during a long-running insurgency—but causing the death of untold Ukrainians—fellow Slavs, with whom many Russians have family ties—would not go down well back home.

Putin has already discounted additional US. financial sanctions. He assumes that some NATO allies will be reluctant to follow suit on sanctions and many other countries with important trade relationships with Russia will look the other way.

Some of that would certainly happen, but the next round of sanctions, even if not applied universally, will be significantly harsher than those Russia has endured so far. Russian banks would be severely penalized and its economy—and military—deprived of crucial American high-tech components. The ultra-rich would find it far harder to spend and save abroad. Ordinary Russians would suffer from lower living standards and soon miss their beloved next-generation phones, laptops and other gadgets. Cutting Russia off from the international banking system would cripple the use of credit cards... Ouch.

Putin could retaliate by cutting off the flow of Russian natural gas to Europe but the Biden Administration is already working with gas and crude oil suppliers from the Middle East, North Africa and Asia to bolster supplies to Europe in the coming weeks.

Russia could step up its cyberwarfare efforts against the West, but this time the West is prepared to respond in kind.

Finally, Russian aggression in Ukraine has already created a unity and energy in NATO that the Alliance has not enjoyed for years. And it’s forcing a shift of US attention from China back to its traditional role of security cooperation with Europe—not perhaps what Putin had in mind.

What to do right now.

Even if a full-scale invasion is not likely, the US and NATO need to confound Putin’s intention to lock them into an endless tactical game while he takes more chunks out of Ukraine and bullies other vassal states formerly part of the USSR.

The West needs to continue with carefully graduated military and economic responses of its own. If Putin tries to make his bluff more credible—for example by invading areas of eastern Ukraine where Russia is already in de facto control—then NATO’s answer must be swift, proportionate, and painful.

Diplomats should keep talking, looking for common ground on arms control and pressing for a face-saving climbdown that Putin and his captive media would be free to spin however they wish.

In my opinion, if Ukraine is to survive and thrive as an independent and democratic state, it must not be either side’s outpost against the other. It should function as a bridge between them. Instead of joining NATO, Ukraine should follow the example of Finland—an independent democratic country bordering Russia that cooperates with the West in most fields but carefully avoids institutional hostility toward Russia.

So sit tight. Read reports from many sources. Factor in the history. And keep in mind that propaganda always comes from both sides. The Russians are not entirely on the wrong side of this one.