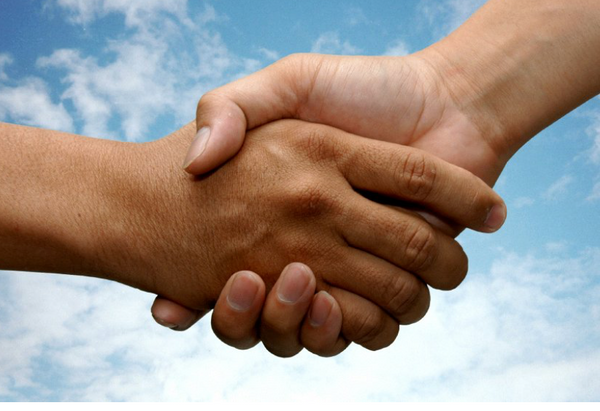 Talking to the Enemy

Talking to the enemy—and in these incredibly polarized times, who doesn’t have some?

I’ve got some useful suggestions for how to turn battlegrounds into conversations.

Know first that I’m no idle theorist. My ideas on conflict communications come from a lifetime of dealing with serious conflicts, from planning nuclear war for NATO, to environmental battles in the Pacific Northwest, to trying to cope with an out-of-control teen. I’ve learned a lot from my successes and, even more from my mistakes.

If you’re new here, I’ll just tell you that I’m a lifelong adventurer, a former Foreign Service Officer, a writer, a speaker, a social and political activist, and for over three decades a leader of the Giraffe Heroes Project, a global movement that gets people to stick their necks out to solve tough public problems—like getting through pandemics and much more. More at johngraham.org and there’s a memoir, Sit Down Young Stranger, on Amazon.

Talking to the enemy. Let me start with a story.

In April of 1994 I was on a peacemaking mission in Cambodia with a group now called Initiatives of Change. Our long-shot mission was to try to convince the remnants of the Khmer Rouge to lay down their arms. You may not know about them, but the Khmer Rouge were a bunch of genocidal maniacs that tried to turn Cambodia into an agricultural commune in the late 70s and killed a million people in the process.

They were finally forced out of power and into jungle enclaves where they continued to stage hit-and-run raids that were making reconstruction difficult if not impossible. Since they had no chance of regaining national power, I and my colleagues were there to suggest a deal.

If they would lay down their arms, the UN sanctioned government in the capital, Phnom Penh, might let most of them go free.

We met with Dith Sawaeng a senior Khmer Rouge leader, in a safe house in Phnom Penh. Sawaeng, when he appeared, looked more like a university professor than a leader of murderous fanatics. He was in his early fifties, with silvering hair slicked back over the crown of his head. He wore a gray, open-necked tunic and shoes that had been shined far more recently than my own.

Before we’d even had a chance to tell him why we were there, Sawaeng launched into the Khmer Rouge party line. It wasn’t true that the Khmer Rouge had butchered anyone, he told us… they were the real victims… now they had to fight the imperialists again… only that morning, government warplanes had renewed bombing the jungle enclave where his family lived.

I knew this drill. I’d seen it in my job at the United Nations from Russians, Bulgarians, Somalis… What you got was thirty relentless minutes of revolutionary bullshit, then the door. They insisted that you feel their pain; they didn’t give a damn about yours. I hadn’t come halfway around the world for this.

So I interrupted Sawaeng. “Excuse me,” I said, “but are you worried about your family?” Sawaeng stopped his lecture, glared at me for an instant, then answered. Yes of course he was worried. For all he knew, at that moment bombs were falling on his wife and youngest son.

Keeping the initiative, I asked him his age. Fifty-one, he said—which was the same as mine. Then I asked him about his life. He had a graduate degree in engineering, as did I. How had he got from engineering to the Khmer Rouge? He said that as a young man he’d gone to fight with the North Vietnamese against the Americans and had been recruited by the Khmer Rouge during the attack against Hué, in what was then northern South Vietnam, in the spring of 1972.

This time it was me that did the double take. “I was in Hué in the spring of 1972,” I said, “helping organize the defenses.”

For the first time, the hint of a smile crept across Sawaeng’s face. “So, Mr. Graham,” he said, “you and I have met before—over gunsights.” I leaned across the table and offered my hand. “Good to see you again,” I said. He hesitated, then stiffly put out his hand.

“How is it,” I asked, still gripping his hand, “that you are still fighting, twenty-two years later?”

Sawaeng withdrew his hand and sat back, ramrod straight against the back of his chair. “Don’t you think I would like to stop?” he said, his voice rising for the first time. “I am an engineer. Don’t you think I would rather build bridges than blow them up? But the war against our people never stops. We are always under attack. Always.”

Then my partners and I explained how those attacks could stop, how a ceasefire could be arranged that would encourage their opponents now ruling in Phnom Penh to offer an amnesty. Sawaeng listened, but made no comment. Then he rose, signaling that our meeting was over.

Sawaeng hung back as the others let the room, and he and I were together and alone for as long as it took to walk a slow fifteen paces. “You are a strange man,” he said. “We both went to war as young men. Tell me, how did you turn from making war to making peace?”

I gave him the best answer I could in the minute or so it took to reach the door. I told him, in essence, that in helping bring peace to others’ lives, I’d finally found the purpose of my own. Sawaeng gave me a final hard, quizzical look before he turned away.

That cease-fire and armistice did happen, although I can’t say for sure what role our meeting played.

One thing it did do was to confirm for me the value of a strategy for dealing with conflicts that I’ve fine-tuned and used with success ever since.

Of course I understand the difference between Cambodia in 1994 and the United States in 2020. But the elements of conflict and how to deal with them are remarkably similar from one situation to the next.

The objective is always to build enough trust to permit honest conversation.

The key to building that trust is finding and expanding common ground, of putting yourself in your opponents’ shoes and getting them to walk in yours.

There is always common ground, even in the nastiest of conflicts. It's just sometimes very hard to find.

The first opening with Sawaeng was the discovery that both of us had been trained as engineers and presumably shared some of that mentality.

Then, as ambitious, idealistic young men, we both had volunteered for war and no doubt had been frightened by our first experience of it. At that point we could put ourselves in each other’s boots—he looking south at the city’s walls, and me looking north where I knew the North Vietnamese tanks were advancing.

Where is the common ground you need to find with the other? Maybe you went to the same school. Maybe you both have adorable kids or grandkids. Maybe you are in the same profession and share its challenges. Maybe you both like to bicycle or knit or play tennis. Maybe you like or don’t like the same book or movie.

It could be absolutely anything so you have to do some exploring. Don’t think of this as small talk—it’s anything but. It’s an important beginning, a little wedge widening the tiniest sliver of common ground into a useable space.

You can’t rush this process; it will probably take more than one encounter. You proceed slowly and carefully, and when you do get to the point of being able to talk about a sensitive subject, you’ve built a record of respectful listening and sharing.

When I was at the United Nations, for example, the United States was completely estranged from Castro’s Cuba even though there were some crucial issues that concerned us both—like Cuba’s links to the Soviet Union and the US economic embargo on the island.

So—against orders—I determined to open my own channel of honest communication with our Cuban foes. The task turned out to be remarkably easy because the Cubans were absolute baseball fanatics as was I. Debating the collapse of Red Sox pitching humanized us, made us likable, made us honest. The Cuban Deputy Ambassador and I became friends, so when opportunity came for conversations on issues more important than sinking fast balls, Raul and I were there to have them.

Talking to the enemy. I don’t need to tell you how important this. Political, racial and economic conflict are tearing this country apart and if we don’t get a handle on it, we are going to become the biggest banana republic ever.

For sure these conflicts won’t end on January 20th when Joe Biden takes the oath of office. Yes, national leadership will be important but it won’t be enough. The toxic polarization that's tearing this country apart wells up out of tens of millions of hearts and minds and it’s got to be dealt with at that level.

If we can have a civil conversation with the brother-in-law whose politics come from another planet, if we can turn around a blind-alley conversation on Facebook, if we can listen with respect to all comers at a (virtual) school board meeting—well, you’re getting my point—then we have a shot at respectful conversations on the important issues that define our success as a nation.

Trust permits honest conversations that can open the door to understanding and to solutions.

If we can talk to each other about what we’ve learned, the places we’ve been, the people and things we like, we can diminish the anger, contempt and disrespect that make serious agreements impossible.