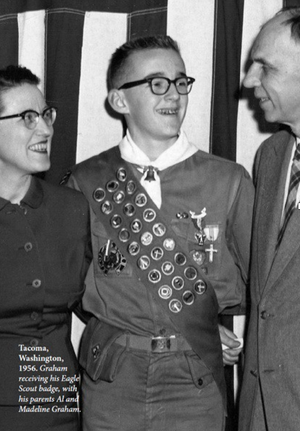 As an Eagle Scout and lifetime supporter of Scouting, I’m appalled by the unhinged speech Donald Trump gave to the National Boy Scout Jamboree in West Virginia on July 24.

Scout jamborees often invite distinguished citizens to speak and the best of them deliver stirring calls for Scouts to live out the personal and civic values of their organization, calls laced with enough inspiring personal stories to keep the boys looking up in rapt attention.

Trump started well enough, with standard testimonials to hard work and American values. Then, after saying he was not there to give a “political” speech, he did exactly that. But it wasn’t just a “political” speech—it was one of Trump’s aggrieved, narcissistic, fact-challenged rants, the kind he gives to rallies of his rabid base, replete with the usual Trumpian jabs at opponents, old and new, and at the “fake media.”

Never mind that many of Trump’s references made little sense to an audience of boys of an age that is focused more on sports, girls, and Snapchat. Trump showed he didn’t care. This speech was all about him, not about Scouting and not about any of them. He was there becau­­se the most powerful man in the world needed the adulation of 14-year boys.

What bothered me most was what he dumped on those Scouts. He gave 40,000 boys an appalling model of leadership: Look, kids, an unhinged, amoral blowhard like me can become the most powerful man in the free world.

Myself, I can still recite the Scout Code 65 years after I learned it. It helped shape my life. A Scout is trustworthy, loyal, helpful, friendly, courteous, kind, obedient, cheerful, thrifty, brave, clean and reverent. Trump’s life overturns every single one of these values in pursuit of his pinched view of a good life as destroying opponents and piling up money.

I’m remembering how many of us, including conscientious Republicans, cringed when Trump used his speech in front of the CIA’s sacred wall of fallen heroes to defend his false estimate of the crowd size at his inauguration. There, the listeners were adults, able to see what he was doing and reject its shallowness.

But young impressionable boys with little experience of the world? What message did those 40,000 boys bring home from that talk? Were they taken in by the blatant self-absorption of the man, a trait that dominates his personality, corrupts his thoughts and overwhelms whatever moral sense he may possess? What effect will showman Trump’s distorted view of the world have on them?

The only value Trump found worth mentioning was “loyalty” and only then in complaining about how little of it he was receiving from some of his minions. Will those boys now believe that loyalty to The Leader outweighs conscience? Trump told them loyalty was the most important thing in life, never mind that Nuremburg established forever that conscience must come first.

The Boy Scouts organization is getting considerable negative blowback for inviting Trump to speak. Good. They should’ve known he would go off the rails, as he so often has. It was inappropriate and unwise to give him those boys as an audience.

What every citizen should see coming is the continuing danger of this man in the White House. Put aside for the moment Trump’s political stances on national issues like immigration and healthcare. Forget his demonstrated failures as a leader, manager and “deal-maker.” Just focus on the man himself and on how he acts and speaks. It’s gotten way past strange. There’s only one word for his performance in West Virginia and that is “demented.”

Surely even Trump’s acolytes in Congress must know now in their heart of hearts that the man is dangerously unfit for the most powerful office in the world. What will it take for Republicans to realize that the country under Trump is not just mismanaged—it’s unsafe?

We do not need more incidents like the speech to the Boy Scouts to know that a deeply disturbed man holds the White House. Republicans in Congress must stop the dangerous game they’re playing—hoping Trump doesn’t blow up the world while they advance their agenda behind the uproars he creates.

Let your Representative and Senators know what you think. Directions for doing that are here.