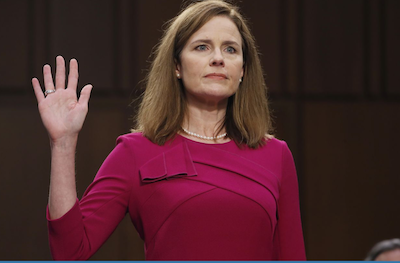 Amy Coney Barrett is virtually certain to be confirmed as the next justice of the United States Supreme Court.. Now what?

[This article is a transcript of a session of Living Room Talk, a video blog by John Graham—adventurer, former Foreign Service Officer, writer, speaker, activist and for over 30 years a leader of the Giraffe Heroes Project, a global movement inspiring people to stick their necks out for the common good. It airs on Faceback every Friday at 5PM Pacific. Check it out. Like the page and share it with your friends. Archive of past sessions here.]

Now to the topic:

Like every other Supreme Court nominee, Judge Barrett bobbed and weaved through her confirmation hearing. But barring connecting with some Hail Mary pass, there’s nothing the Democrats in the Senate can do now to prevent her confirmation, which will establish a fairly solid 6–3 conservative majority on the Court.

Conservatives are ecstatic: this is something they’ve worked toward for decades.

For some liberals this is the end of the world as they know it.

Let me take a deep breath and offer my own perspective.

First, who is Amy Coney Barrett?

Barrett is, as you no doubt know, a staunch Catholic conservative, apparently happily married and with seven kids, two of them black Haitian kids she and her husband adopted, and one a birth child born with Down’s Syndrome. As a fervent pro-life advocate she has certainly walked her talk.

By all accounts Barrett is a serious, competent person, a scholar with an impeccable personal life.

She is smart, tough, thoughtful, and a person of high personal integrity. The American Bar Association rates her as fully qualified for the nation’s highest court. If she were a liberal, Democrats would be thrilled with her.

But how will Barrett rule on the Supreme Court?

First, how far to the right is she?

Her rulings put her closer to the middle of the Court on cases involving employment discrimination, labor and criminal defendants, but she’s been much more conservative in cases involving hot-button issues like gun rights, voting rights, and the right to choose.

Will Barrett be her own person on the Court? I think there’s every indication that she will be. As a student, as a lawyer, as a judge, she seems to have pretty much charted her own course. You may not like or appreciate that course, but it seems to be a genuine expression of who she is.

Of course Trump chose her for the Court because she’s a staunch conservative — but that doesn’t mean she’ll be a shill for him or for any future president, political party or corporate interest.

From my research, I think it’s a good bet that her rulings from the bench will continue to be motivated by her deeply held interpretations of the law.

Yes, I understand that’s exactly what concerns some of you, and it probably should.

Finally, in my opinion, I don’t think it’s fair to cast her as a character from the Handmaid’s Tale because of her religious beliefs. By all accounts her marriage is a balanced partnership.

More about Barrett’s Catholicism in a minute.

More important is how Barrett thinks about the law.

Judge Barrett, in describing her judicial philosophy, has called herself a “strict originalist” in the tradition of her mentor, the late arch-conservative Justice Antonin Scalia.

What does being an “originalist” mean? Bear with me while I take you into a legal thicket on this issue because it’s essential to an understanding of how Barrett might shape our futures.

An originalist like Barrett understands the Constitution to have the meaning that it had when it was ratified in 1789. Her interpretation, she says, draws from what “reasonable persons living at that time would have understood the ordinary meaning of the text. And that meaning doesn’t change over time.” She goes on, “and it’s not up to me to update it or infuse my own policy views into it.”

I’m in good company in thinking that this is a major reason why Barrett shouldn’t be put on the highest court in the land.

For starters, those “reasonable persons” whose interpretation of the Constitution she honors were all white male property owners governing a misogynistic, racist society where property included other human beings. Are those really the people whose views we want to guide us in the present day?

And interpreting the Constitution as literally as possible makes it a dead document, not a vibrant guide for our modern society. The Founders didn’t know about vaccines, electricity, antibiotics, the internal combustion engine, the idea of universal human rights, birth control, nuclear weapons or the Internet.

Neither did the Constitution address social issues key to the pursuit of happiness in an advanced nation in 2020, such as healthcare, a good education, and a safe retirement.

Now here’s the key point: Originalists like Scalia and Barrett conclude that the Supreme Court should “not be in the business of imposing its views of social mores on the American people.” Instead, originalists say that the issues not specifically mentioned in the Constitution should be addressed and resolved not by the courts, but by legislators at the federal and state levels.

Yes, you got it: this shunting of hot button social issues to legislatures across the land has obvious implications for previous Supreme Court rulings like Roe v. Wade.

So let’s take a look at that what Barrett might do with Roe v. Wade?

There’s no doubt that Barrett is personally anti-choice and believes that life begins at conception.

But her colleagues on the Seventh Circuit Court cite several examples from her three years on that Court where she demonstrated that she can separate her personal views on abortion-related issues from her judicial decision making.

In her own words, “If there is ever a conflict between a judge’s personal conviction and that judge’s duty under the rule of law, then it is never, ever permissible for that judge to follow their personal convictions in the decision of the case rather than what the law requires.”

Well, with Roe v. Wade again on the horizon, Barrett’s ability to separate her personal views from her judicial rulings will be tested as never before.

But even if she passes that test, as we’ve just noted, Barrett is an originalist and that means that because the Constitution does not say anything about abortion, then the matter should be up to state and federal legislatures, not the courts. Logically this would suggest that Barrett thinks that the Court should never have taken up the issue in the first place.

All is not lost for pro-choice advocates, however, and that’s because of a legal doctrine called “stare decisis” — a term that refers to the legal practice of following precedent. It translates as “stand by the thing decided.” And it’s a major reason why many jurists, even if they think an issue was originally wrongly decided, will not vote to overturn it.

Stay with me again because this is yet another trip into the legal thicket that’s essential if you want to understand how the Supreme Court might rule on Roe v. Wade.

In 2013, when she was a professor at Notre Dame, Barrett wrote an essay pointing to the strength of stare decisis — but at the same time suggesting that some room be left for some cases to be overturned. “If anything,” she wrote, “the public response to controversial cases like Roe reflects public rejection of the proposition that stare decisis can declare a permanent victor in a divisive constitutional struggle.”

So whether Barrett honors stare decisis enough to keep Roe v. Wade on the books is simply not clear. For what it’s worth, however, at her confirmation hearings Barrett declared that she had no agenda to try to overrule current Supreme Court rulings on the issue of abortion.

Even if the court doesn’t overturn Roe v. Wade, there are cases percolating in lower courts nationwide that would continue to chip away at an woman’s right to choose. And as an originalist, Barrett would be tempted to give state legislatures more say in the matter.

Finally, as more tea leaves to read, in 2016 Barrett told an audience at Jacksonville University she believed that while Roe wouldn’t be overturned, access to abortion could continue to be limited.

She said, “I don’t think the Roe’s core holding that women have a right to an abortion would change. But I think the questions of whether people can get very late-term abortions, or how many restrictions can be put on clinics — I think that would change.”